Hierarchy refers to asymmetries in an type’s computation weighting of objects. There are three main asymmetries that comprise a type’s hierarchy.

Native-state asymmetry refers to the higher weighting given to the primary energetic function. This weighting causes greater amounts of processing to happen in that energetic quadrant as a default. For example, in the span of time that the psyche computes 1,000,000 cycles, the primary function may constitute 62.5% of those cycles. The remaining three energetics would receive roughly 12.5% of the computational cycles each.

However, this native-state asymmetry is not absolute. If the primary function attempted to compute 99% of those 1,000,000 cycles, then the other energetics would be psychologically stressed, since they also need to cycle at their own proportions, not below them. Oppositely, if one of the non-primary functions attempted to cycle at a higher percentage than the primary, this would cause a strong psychological toll and an energetic toll. At a particular slice of time, the manifested ratios of computations can switch from [J-: 65%, P+: 12.5%, P-: 12.5%, J+: 12.5%] to a modulated state of [J-: 25%, P+: 12.5%, P-: 12.5%, J+: 32.5%]. When a type is modulating or over-modulating a non-primary function above the primary in this way, they will temporarily execute more computational cycles in that energetic quadrant, but will incur a psychological toll.

Psychological toll results from focusing on what you don’t want to focus on, or thinking in ways you don’t want to think. This causes emotional and bodily fatigue. Native-state asymmetry does not mean that the individual will always, at every second, process more cycles in their primary function. It’s a description of the baseline and least energetically stressful state for their system to exist in. 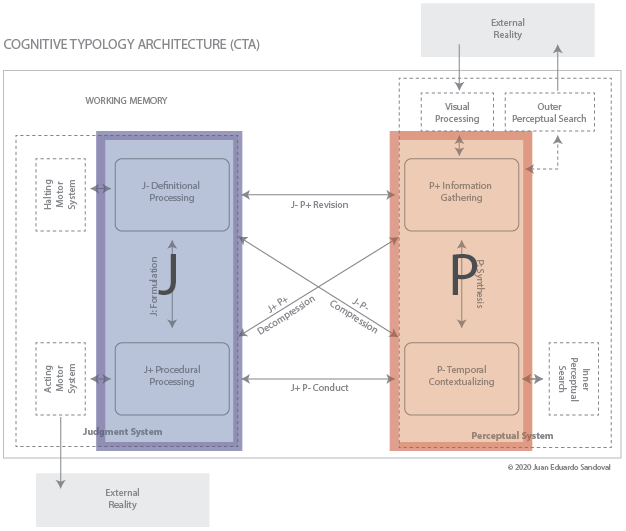 The second asymmetry is that of the primary oscillation existing over the secondary oscillation. A type is defined not only by the most prominently weighted process, but by the net agenda of either the Judgment System or the Perceptual System. If the native-state function belongs to the Judgment System, then the entire Judgment System holds priority over the Perception System in terms of aims & ends. This is because both of these systems differ in their aims & ends. The primary and polar processes will share aims & ends, even though they are pivoted against each other in their approaches. This will cause both the primary and polar function to be more likely to oscillate with one another when it comes to matters of purpose, meaning, and values. This shared purpose and meaning can lead to a more rapid development of the polar function, even though it possesses the most energetic toll. The pursuit of purpose and meaning is compatible with suffering, and is able to suffer for purpose and meaning. 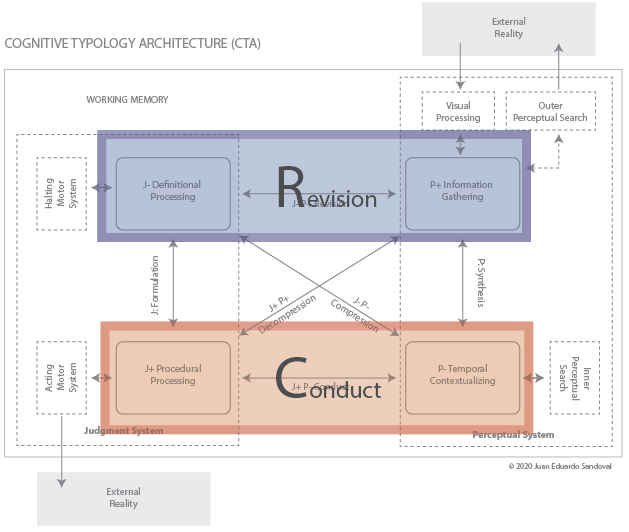 The third asymmetry is that of the thesis of the type and the antithesis. Unlike the polar asymmetry, which is motivated by purpose and meaning to endure pain, the thesis is motivated by a complementary relationship between functions in terms of metabolic compatibility. This thetical compatibility is between J- and P+, and between J+ and P-. The function most conducive to the operations of J- is P+. Definitional Processing depends on Information Gathering to be able to refine its definitions, and neither activity is antagonistic to the other. These two functions form an axis that is mutually cooperative. Similarly, the operations of J+ and P- are conducive to each other. Procedural Processing depends on Temporal Contextualizing to conduct itself in a landscape, and neither is antagonistic to the other. Because of this complementary relationship, J- and P+ commonly come to form a complex, and J+ and P- form an opposite complex. These two complexes can collide with each other, forming opposed personalities. This further drives the two apart, and creates this third psychological asymmetry. 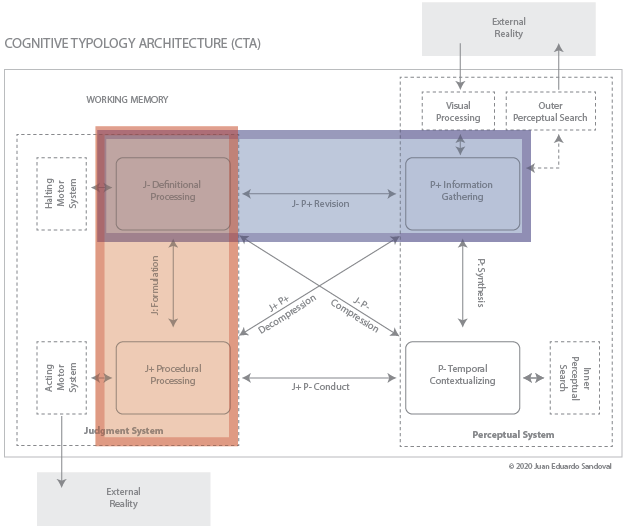 The hierarchy between the four energetic functions is formed by these asymmetries coming together. Collectively, there is only one hierarchy formed from these three asymmetries. However, this hierarchy cannot be modeled one-dimensionally. It exists two-dimensionally in a block formation. The table below shows this relationship in the J- type:

The polar hierarchy orders the functions not based on complementality, but on purposefulness. This angle highlights a type’s primary aims & ends, followed by its secondary aims & ends.

The first oscillation is either the J or P system, and the second oscillation is the other. If the J system is first, the aim of the individual will be to accomplish the collective task of the J system, via both poles. In order to do this, the primary function is in a struggle with the polar. This is because it cannot achieve its ultimate goal without rallying together the polar function, and utilizing it. Because of this, the polar hierarchy is simultaneously the most central dilemma of the psyche but the most difficult.

If we wish to liken the relationship between the primary and auxiliary function to that of a friend or ally, then the relationship between the primary and polar is that of a (conjoined) twin. Friends and allies are easier to get along with because we associate with them due to complementary relationships. However, they are also somewhat less central than our family. Family, on the other hand, we do not choose voluntarily — but they are there with us forever nonetheless. Reconciling with family can be difficult but also fulfilling.

The secondary oscillation plays a supportive role to the primary oscillation. If the person is a P-lead, then the J system’s formulation will be directed toward explicating the nature of inexplicable being-ness. Language and systemic constructs will be used as instruments to give dissertation to a universe that transcends specificity and confinement in parameters and neat laws. If the person is a J-lead, then the P-system’s synthesis will be directed toward describing the incalculable nuance and informational complexity to the structure of the universe– while never necessarily disregarding the structure itself or disbelieving in some absolute order.

Likewise, the two lower functions (3rd & 4th) collaborate like two workers in an assembly line to produce a counter-thesis to the first two functions. Thus, the lower two functions comprise a cognitive complex that is antithetical to the top two. These two theses map onto left-leaning and right-leaning worldviews. The human psyche has seen it fit to eternally pivot these two theses against each other, for the purpose of achieving social balance at the collective level. Those people who live through their thesis, and have a thetical development, will battle against their antithesis as manifest in other people.