Before delving into the CT Model, we first have to lay the framework for how CT is conceptualized in the broadest sense. The model is composed of four main layers of analysis that scale up exponentially through the phenomenon of emergence. Thus, to understand how CT is framed we need a proper introduction into emergence. This video below provides a user-friendly introduction to the concept:

How Emergence Works: In nature H20 creates snow, wetness and other properties not inherent to the H20 molecule in isolation. Proteins, which are also not described in the properties of atoms themselves, give rise to life --the most complex thing we know of. As simplicity gives rise to complex order, entirely new phenomenon emerge with properties larger than the sum of their parts. Our universe exists in this fashion, with largely different manifestations at different scales. It thus becomes necessary to view reality in a scale-dependent manner; studying everything at the appropriate level of magnification. 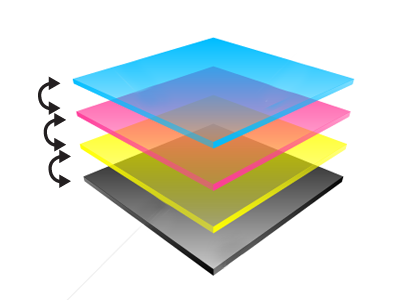 Type is one such phenomenon affected by emergence, as type crosses over several scales of magnification as small effects multiply exponentially. While type at the fundamental level may be simple, and little more than a subtle difference in the instructions (or order of operations) we each give our brain, far more complex properties result in humans from the multiplication of that rather simple set of rules. As we make thousands of unconscious micro-decisions a day, through this metabolic process, we create entirely different lifepaths, habits and outlooks. Common themes emerge out of this multiplication which are expressed as philosophies, behaviors and careers --none of which are explicitly embedded in the biology of the function itself. Type cannot be comprehensively described merely by it's metabolism, nor solely as it's behavioral effects. But neither can the behavioral effects be left out while the metabolism is considered the real thing because one creates the other as consistently as H20 creates wetness and snow. Each scale of magnification creates a reality of its own, which is more than the sum of the previous scale's parts. The following diagram demonstrates the four main scales of magnification that constitute the expression of cognitive type: 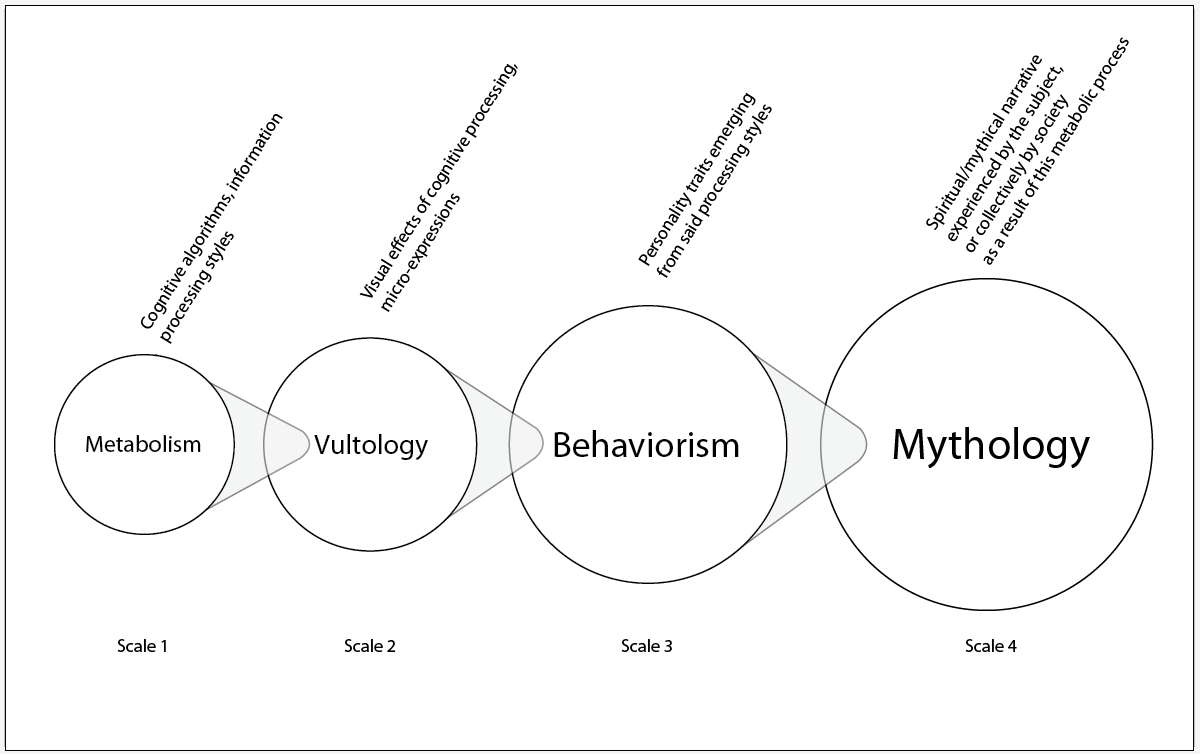 All of these layers are part of a function, not just one. So far as we can tell, none of these can be excluded from a full definition of the function as they are tied to one another forwards and backwards.

The relationship Between the Layers 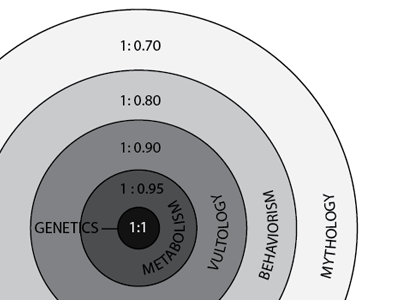 However, the relationship between these parts is specific and nuanced. As we move away from the core causal agent (1:1), we incrementally move away from a pure description of type. These domains exist as a ripple effect as portrayed in the diagram to the right. The closer we are to the root causal agent, the more tightly correlated the two layers are. For instance, any specific behavior will not necessarily be present in all those of the type because behaviorism is an emergent property a few layers further out. But while we cannot predict what specific sets of behaviors any one person will adapt out of a given profile, we can estimate that they will possess far more of them than the average person simply through the identification of their vultology.

Each of these layers has unique limitations, challenges, and benefits. Below we'll be studying the relationships that exist between these scales of magnification and how they produce the end effects that we see at each level: 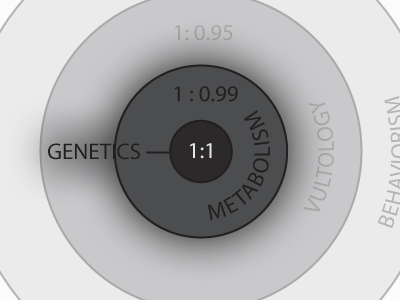 Type exists first as an experience of consciousness at the millisecond level characterized by how we metabolize information. Information metabolism refers to the way in which our brain processes data at a rapid rate to produce our unbroken sense of awareness. However, despite being in the midst of that consciousness, we are not entirely aware of how our own thoughts form. Due to how this metabolism necessarily precedes our own thoughts, it generates the mind only after it has already executed hundreds of micro-computations which we can neither see nor trace. And unfortunately, our location at the center of our bodies does not gift us with any exceptional knowledge as to who we are and how we operate. It's for this reason that self-report and self-perception is notoriously faulty. And if it were possible to accurately extract the essential metabolism of people via a survey of their phenomenological experience, there would be no need for vultology. Thus, while the metabolic layer is the closest to the root causal agent, it suffers from the most limitations when we try to use only our minds to gauge how they work from the inside-out. Just as a face cannot see itself, we require an outside mirror to reflect back to us what we look like. 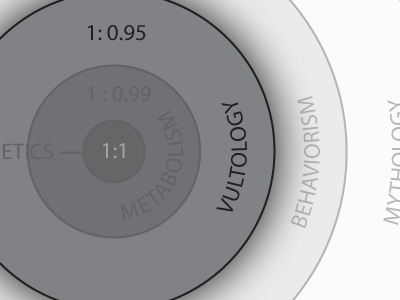 This is the aspect that operates as the key identifier. The very first objective window we have into our information metabolism is in our vultology, which reveals the secondary effects of that cognition as it's happening second by second. We may not always be able to trace the construction of our thoughts from an inside view, but we can track their emergence from the outside-in. It's proximity to consciousness makes it the most reliable indicator of it's existence, but vultology is not without it's own limitations. Through dedicated practice, some involuntary facial muscles may be deliberately controlled to a degree. Training in gesticulation may affect the tempo of signals as well. And irregular anatomy may also interfere with the easy identification of signals. These noise variables push vultology away from a 1:1 connection to cognition in some cases. It's possible that the combined noise of these variables will lead to the mis-identification of the metabolism of the person. In order to double-check, a testimony of the person's self-perception and an analysis of their behavior are compared to the vultology --all three of which can be seen as more accurate if there is convergence between them. 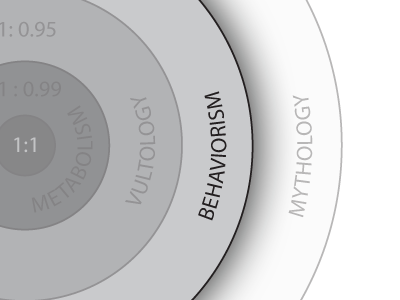 The behavioral aspect is the most rich with detail and information about what it means to be a type. It offers real-world examples of what things may be liked, what habits may emerge and what hardships may be faced. But as mentioned above these can only ever be general in nature because type's defined by how cognition is formed, not by behaviors by themselves. The variables contributing to an affinity or repulsion to any particular topic are ultimately innumerable. We can only predict an affinity for the general domains of interest with high accuracy, but not to any exact topic/object/belief. Nonetheless, while the omission of any one anticipated behavior is of no concern, if there is an overwhelming mismatch in the behavioral profile and the subject, then it signifies a potential error in the vultology and metabolism.

Here we see an example of the forward and backward relationship between the layers. We can liken this to the relationship between the three branches of government. Behavioral mismatches --if strong enough-- may require a revision of upper layers. But in general, vultology is to be trusted above static behaviors if all else is equal. If the vultology is robust, a lack of identification with specific behaviors is more attributable to the limits of collapsing all possible type manifestations into a set of most iconic ones. But when enough visually typed people display a trend in that direction, then the behavioral profile is slowly modified to reflect the larger reality of those with the given vultology. 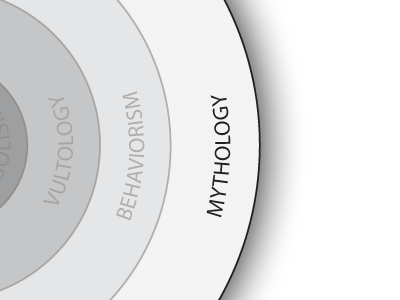 Lastly, the mythological layer is the most removed from the causal agent, but is also the highest abstraction of that causal agent --its absolute manifestation. While typical behaviors will arise from the perpetual use of functions at the millisecond level, deep-rooted life narratives will emerge from the inescapable presence of the function within the person. The function comes to embody not just a set of behaviors, but a libidinal nexus; a sophisticated cognitive network with a voice and consciousness. Far from being only metabolic processes, the functions become sub-personalities or psychic characters that actively generate this drama. They are archetypes which occupy a role in the individual mind as well as in the collective. The net effect of these archetypes existing in the population produces large-scale social structures which define our political and global climate.

Due to this influence, the archetypes are also able to penetrate society as a whole, not just individuals with the function in question. All people can experience analogs to all the 8 myths whether by direct contact with them from their own psyche or from exposure to it from the outside. If it is from the outside, the dynamic is one of a super-ego relationship. An Fe type may be overtaken by the rationality of the Te myth which is praised in their parent culture --causing them to be driven by the myth through their own Fe function. This is generally undesirable as the super-ego is coercing the Fe type into an aberrant state and away from their own spiritual journey. Through this final layer, it becomes possible to diagnose spiritual sickness, understand the shape of the heart and illuminate people as to the higher callings of their being. 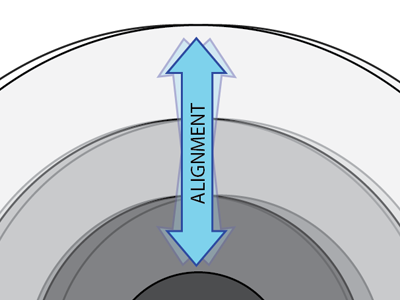 The identification of type is a challenging process and a greater level of accuracy is achieved by triangulating information from each of these layers. CT gauges the probability of an accurate typing not by any one of these layers alone, but holistically through the net convergence of the four. The more convergence there is between these layers, the stronger the analysis is considered. This methodology acts as a quadruple checking system, and demands a great level of rigor but also produces a higher level of reliability.

This methodology is not only applied to individual readings, but to the foundations of the CT Model itself. When examining the core tenants of the theoretical architecture, the four scales are pivoted against each other until a solution is found that is coherent and consistent across all dimensions. In this sense, CT seeks to have a consistent and seamlessly progressive explanation for how human psychology unfurls from the most microscopic scale up to the macroscopic and global scale.