The SeFi type emerges when the Se-Ni oscillation is primary and lead by Se, while supported by the Fi-Te judgment oscillation. The SeFi’s countenance is among the most distinct. There’s an open dialogue between the eyes and mouth, with both seeping into each other and sometimes competing for facial space.Their Fi tension will often rise high, breaking through their cheeks and elevating the skin under the eyes. But unlike the NeFi, whose relaxed eyes yield to the intrusion of this upward tension, the SeFi’s eyes remain uncompromising in their sharpness. This causes a clash to occur, giving rise to a manic look as seen in Figure 76.d.

Considerably more accidental expressions of disgust, shock and upset result from this clashing than what we see in other Fi-Te types. Yet SeFi’s are among the more amiable of people, harboring a natural curiosity and receptiveness toward new encounters and personalities. 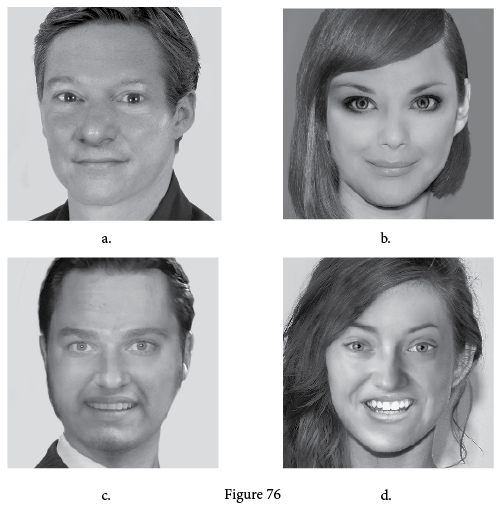 As an Se lead type, the SeFi will aim to absorb data as it appears to them – allowing the experience itself to auto-populate the richness and subtlety of their reality – rather than diverge their imagination toward a tangential associative process of data absorption, as is more typical of the NeFi. The SeFi will, like the SeTi, feel a heightened sensitivity to both the pleasure and discomfort of touch, sound, sight, smell or temperature; allowing this stimuli to be at times deeply compelling as well as deeply disquieting.

But although they are connected to the world in an immediate way, the SeFi will have an altogether different subjective experience of these sensations. An additional layer of affectivity will accompany them which is absent in the SeTi; the placement and judgment of these sensations along a private (although initially ambiguous) ethical palate. The sentiment of a thing will register itself as important, and the SeFi will gravitate to things not just for the stimulation they provide but for their capacity to uplift the life-principles they hold.

As the SeFi goes about life, their exploration will lead naturally to that which has certain energetic qualities and they will learn more about their own Fi’s values through this experimentation. They will develop a relationship with their own Fi by encountering many situations and people who prompt an occasion for its palate to be unearthed and refined.

The SeFi will carry a loose body posture that is receptive and alert to environmental inputs. A fair amount of toggling will accompany their eyes, although for the most part they will stay locked on to one element of the environment at a time, absorbing its many nuanced qualities.

As with many perception types, their head may swivel easily toward the shoulders as they talk, with their eyes directing a series of swaying motions. They may have very identifiable laughter which reverbs freely at an unusual volume and rises high on their face. Their articulation will involve many asymmetrical snarls and contain a voice that is either nasally pinched or breathy and sprite-like.

When Fi is open, sensitive and receptive in this type, the SeFi will be highly motivated toward seeking out experiences which amplify a sense of vitality, transparency and interconnection. Just as each explorer type pursues that which satiates their thirst for novelty, the SeFi socialite will aim to enrich the moment through the exploration of others and the many interactions they bring.

Yet, unlike the FeSi and FeNi, who more often coordinate such interactions in order to facilitate a mutual and established atmosphere, the SeFi seelie will be far more unscripted and allow for their own unique expression to ripple across that of others and collide with them as it will. Artistic avenues of exploration may be entertained, often taking the form of real life performance and improvisation.

Perhaps more than any other type, the seelie socialite embodies a very tangible appreciation of life, diversity, the human heart and the body. In this sense, the SeFi echoes the sentiment of many SeTi who seek to partake in the complete availability of experience. But opposite of the SeTi sensationalist, whose lust might only be tempered by their Ti’s evaluation of risks and their Fe’s level of concern for social repercussions, the SeFi seelie may be more reluctant to abandon a concern for their body, choosing many times to avoid exploration that is life-harming in principle.

This may also extend to the nature of the selected setting. They may decline a friendly outing to the zoo for a desire not to enjoy the caging of animals or will avoid restaurants that engage in animal cruelty.

However, notwithstanding these ethical precautions, the seelie socialite may be so turned toward the amplification of experience that insufficient precautions are applied to the effects which those experiences might bring.

Just as the NeFi’s consequence for uncoordinated Ne energy is a fragmented sense of direction or identity, the SeFi socialite may find herself in logistical disarray, drifting between jobs or romances with no firm anchoring. But if Te is properly integrated into the psyche, it brings with it an indispensable structure and focus through which their exploration can be directed.

The collaboration of Se and Te naturally produces far fewer discrepancies in priorities than what we witness between Ne and Te, due to Se’s literal and linear comprehension of reality. The operation of Te can leverage this 1:1 relationship to generate a more streamlined methodology, giving the SeFi a more steady psychic assembly from the initial input source to an eventual, functional output.

As such the SeFi’s capacity as a coordinator and administrator, once matured within their Te, is substantial. At work they may demonstrate an acute awareness of systemic necessities, a strong and proactive energy, and a quick response time to changes; steadily growing into leadership positions. As a proactive gamma type, the SeFi manager is the sister subtype to the TeNi executive.

For symbolic purposes I assign the title of executive to the TeNi and manger to the SeFi, due to their relative level of Te prioritization, although both types are easily found in either occupation. Generally, however, the SeFi will prefer a position that is more interpersonal and level with their peers than one which stands detached and high above them. They may be the human resources clerk, the head nurse or veterinary director which doubles as the catalyst of responsible fun and laughter at the facility.

When the SeFi is unseelie, holding an Fi aesthetic that is closed or particularly selective in its receptivity, any physical discomfort that also registers as being against their life-principle will prompt a very malcontent reaction; a twofold distaste from their leading processes. An inclination toward volatility and social friction will persist as their Fi’s palate oscillates between resonance and dissonance among the many situations they encounter.

Unlike the FiSe, whose dissatisfaction with situations may brew a sullen inner distaste, the SeFi may extrovert these displeasures at the very point of their emergence. The immediate moment is rejected and their unyielding Fi will defend its stance through nasal Te articulation and snippy, sassy gestures. Here, Fi has not yet been properly tempered, causing these flare-ups to be raw and often not properly matched to the degree or severity of the situation.

They may be rashly vindictive and impatient when confronted with a sensation or behavior from a person that they disagree ethically with. We see an example of this subtype in the young Ella Yelich-O’Connor (better known as “Lorde”) who has promptly developed a reputation for her passive-aggressive social media commentary directed at the actions and lifestyles of dozens of other music artists.

Where others might be more prudent not to needlessly burn bridges between one’s peers and potential collaborators, Lorde allows her Fi palate to inform her on the character of people and this personal evaluation is made audible. For the SeFi feisty unseelie, no qualms are felt from the loss of an opportunity to collaborate with those already deemed incompatible.

But as is true of any ethical type, this antagonism is often expressed in defense of a cherished ethical stance. These quarrels may arise from the SeFi’s strong advocacy of certain rights and the insensitivity of others to those positions.

In a few rare instances, when Ni is highly favored by the psyche and strong credence is given to its impressions and interpretations of events, we come across the SeFi gypsy. I select this term for its capacity to bring into our imagination a traveling magician, performer or practitioner of obscure and often discredited arts/crafts – not by any ties it may have to the Romani people of Europe.

As we have previously discussed, the polar process is most commonly channeled for the agenda of the primary, and in the SeFi these far-reaching interconnections are pursued for their capacity to relate together and explain the events of the present. As such, interconnections are intuited to exist beneath the immediate and sentimental and in some cases this stimuli can bring forth the larger pattern that lies underneath.

For example, the SeFi may feel that an energetic network exists which touches and travels between the hearts and minds of individuals. A blending may occur where the inner radiation and spirit of Fi is given a physical definition; the SeFi may dabble in the reading of auras, the channeling of chakra or Ki energy. They may seek for the significance behind palmistry, tarot reading, taoism, kamasutra, and all manner of extrasensory arts. When the archetype is fully embodied, the SeFi may adorn herself in eclectic and colorful attire, reminiscent of the indie FiSe, and establish themselves as an artisan of their particular interest.

For the SeFi, this practice is born from an aspiration to fully assimilate and synthesize their polarity, yet a proactive novelty will propel this curiosity forward with all the energy of a Pe lead type. Unlike the NiTe and NiFe, the gypsy will more rarely be the originator of doctrines and will more commonly explore the pathways made available by those before them. They may lie under the wing of an NiFe guru or FeNi alpha visionary and learn from them what they can before traveling along another path.

For a complete account of this type’s vultology, we can look at interviews of the following SeFi public figures: