While CT is based on a growing body of data, the interpretation of that information is still necessary. As with any field of study --whether it's physics or biology-- a theoretical model is used to give context, explanation and structure to the observations seen. The following is a brief overview of the current CT Model:

The first and most fundamental division between people in the CT theory is that of Judgment and Perception. Unlike other theorists who place Introversion/Extroversion as the primary division, CT begins with J/P-lead. This is more comparable to Socionic’s J/P division and is not to be confused with the MBTI’s J/P. This division corresponds to Iain McGilchrist’s concept of left and right hemisphere differences. These create measurable effects in the body’s rigidity (J) or fluidity (P).

From here, the next bifurcation is into two axes: Je-Ji and Pe-Pi. Judgment --the impulse towards order-- is directed either externally (e) or internally (i), and Perception --the impulse towards information gathering-- is directed either externally or internally. This creates four primary libidinal vectors: External Order (Je), Internal Order (Ji), External Information Exploration (Pe), Internal Information Synthesis (Pi). Each of these four energetic vectors creates vultological effects. These four energetic categories are more fundamental than the eight functions, where for instance Fe and Te have more in common with each other than either has with Fi and Ti.

Each person has all four energetic functions –or two pairs (Je-Ji, Pe-Pi)– and all are necessary in order to generate consciousness. The combination of these four functions is what we call Type. But within type, one oscillation pair will have a dominant cognitive priority. And of that pair, one energetic side of it (E/I) will be the primary function. The second pair of functions will be subordinate to the primary oscillation and embedded within its poles.

There are four possible hierarchies that arise from this; each with one of the energetic functions (Je, Ji, Pe, Pi) as primary and the remaining three functions in the orders seen above. However, this hierarchy is not necessarily a scaling progression of strength, but a specific relationship. For instance the polar (“4th”) function is the other side of the primary (“1st”) and thus has the second most powerful agenda in the psyche despite it’s recessive relationship to the primary. The secondary oscillation (“2nd”, “3rd”) plays a supportive role to the drama created by the eternal battle between the primary and polar functions. In CT, function strength and function order are two separate things. The function order determines what role a function plays in the psyche, but the function's strength and level of consciousness can increase with continual use.

These 4 types then branch into 4 types each as the attitudes (F/T/N/S) are introduced. Therefore in CT the 16 types are an outgrowth of the 4 energetic types which are more fundamental. Additionally, those possessing the same function pairs belong to the same function quadrant or "family": Alpha (Ti+Fe+Si+Ne), Beta (Ti+Fe+Ni+Se), Gamma (Te+Fi+Ni+Se), Delta (Te+Fi+Si+Ne). All members in these families share many of the same dramas and lifepaths and in many ways are closer to each other in kinship than they may be to all other types. 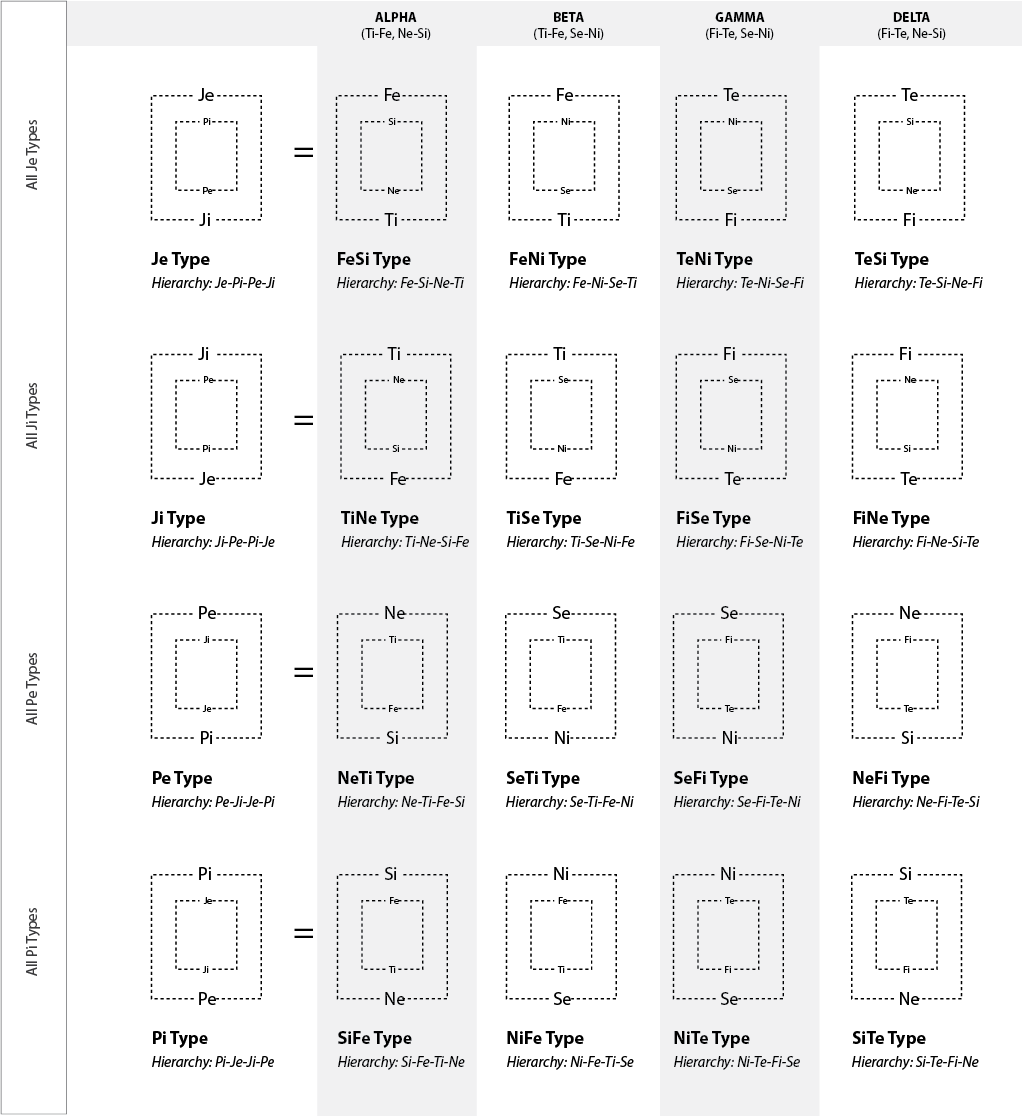 Next we note how functions exist on a spectrum of consciousness, with fully conscious ( l ) on one end and subconscious/unconscious ( - ) on the other. The primary function is mostly conscious even from early childhood but the remaining three are unconscious by default. The lower three functions may remain unconscious or rise into consciousness in whatever combination, depending on how the individual develops through the pressures of life. This creates 8 possible states of development that the four functions can take.

Division #7: Attitude of the Heart (Light/Dark)

Aside from the differences we encounter in development, the ethical (F) function also manifests two possible forms which we can designate as light and dark. The table below shows these two forms and their names in both ethical functions:

Ethics divide the world into right/wrong, just/unjust and good/evil. And in order for ethics to be comprehensive they must have the ability for mercy as well as punishment. Ethics cannot be wholly agreeable and kind, but must also exercise hostility towards wrongdoings if they are to preserve what is of value. Because of this, the ethical function necessarily has a light and dark side and each individual's vultology can be read to determine which facet of the ethical function more strongly dominates their temperament. This also corresponds to an archetypal reality and is an indicator of the shape of a person's internal world.

In the CT model, mental health is also factored into the variability between types. We track a person's degree of mental health --in a general sense-- by the presence of the Flat Affect signal on their face: 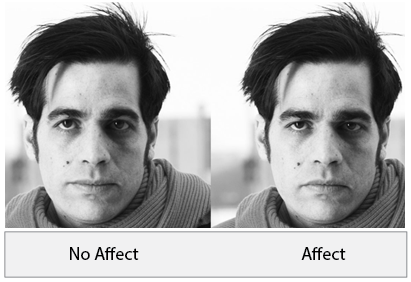 Flat Affect is the fallen quality of a face caused by a chronic downward restriction of facial muscles and a repressed expressivity. The more severe the flat affect is evidenced on the face, the more probable it is that a person has a mental illness. The same type will be vastly different depending on whether they’re healthy or psychologically weighted by depression, anxiety or some other mental illness. Furthermore, each type has a specific and different manifestation of unhealthiness. As such, the presence or absence of flat affect creates two separate designations for each of the types.

Lastly, we come to the matter of male and female psychology. Studies have confirmed that biological sex creates psychological differences among individuals. Therefore two individuals of the same cognitive type and even the same development will still differ from each other by the features that their sex adds to their personality. Statistically, female psychology is tilted towards the Big Five trait “agreeableness” (interest in people) and male psychology is comparatively more “disagreeable” and interested in things. In CT these biological differences are accounted for, altering the behavioral baseline for each type. For example, a male of an ethical priority (high F function) will still be relatively more interested in mechanical things than his female counterpart, thus two separate psychological profiles are needed to fully describe their temperaments.

In addition to being a theory of typology, CT also converges with Archetypal Psychology. Each facet mentioned above has an archetypal counterpart in CT; a force or character that is embodied within an individuation journey.