The NiTe type emerges when the Ni-Se oscillation is primary and lead by Ni, while supported by the Te-Fi judgment oscillation. NiTe have among the most consistent appearances, varying little in their animation or emotional expressions. Their steady, Ni eyes will retain a permanent position on their face, not being interrupted by their Fi’s snarling smiles.We will see a dynamic division in the face between the area above the nose and below it, with the area below conveying expressions in a contained perimeter as seen in Figure 72.d. While the eyes of the NiFe have a more hypnotic and alluring quality, the eyes of the NiTe carry a more unapproachable and often intimidating gaze, earning this signal its fame as the NiTe death stare. 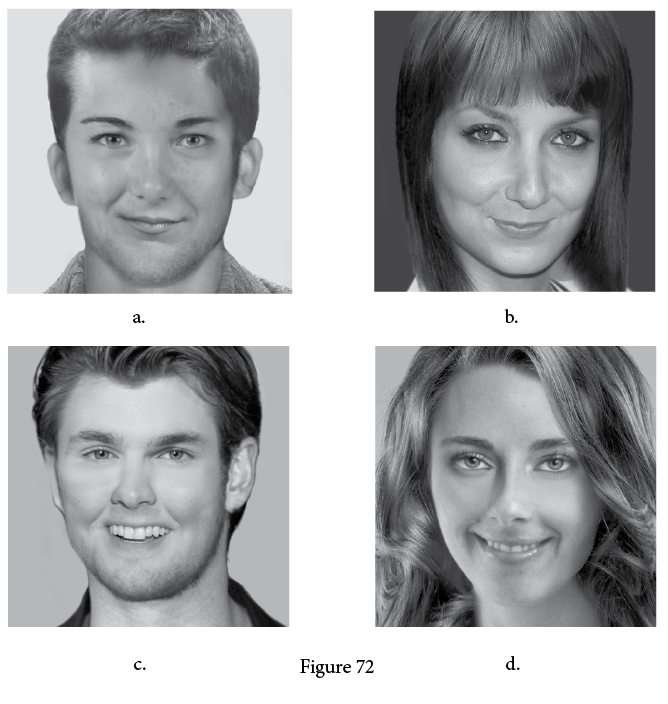 Moreso than the TeNi, this type will tend toward a nasal and monotone voice, due to a lack of gesticulation and rhetoric, which more heavily accompany the TeNi. The NiTe,  by contrast, will often speak in a matter-of-fact voice without any adamant investment; conveying instead a personal opinion, experience or logistical observation of the present.

When Fi is involved, these personal opinions can be shared with pointedness reminiscent of the FiSe. But due to the NiTe’s nature as a perception type who is not heavily motivated toward fixed and crystalline conclusions, these subordinate Fi judgments are not always seen through to the end.

They may seep out occasionally but not be given enough time or thought to congeal into arguments. As such the NiTe may dismiss their own stirrings after the moment has passed, causing them to appear passive aggressive to others.

Despite this sometimes aloof composure, the NiTe is no more ill-willed than any other type. They are often quick to channel their energies into causes they believe in, and can be quite effective in executing on those beliefs. These beliefs will, as in the FiSe, have a selectivity to them and not shy away from the unconventional if it can better represent their alignment in matters of life-principles.

In cases where Ni and Te are heavily favored, and a disconnect exists between function polarities, a stoic character will accompany the NiTe. In this subtype, holding the Te process under the wing of the worldview process causes, to some degree, a casual dismissal of new information.

Things which don’t appear to align with their existing sense of predictability automatically fall on the wrong side of Te’s judgment blade. An aura of suspicion surrounds this subtype, as the privacy of Ni guides their perspective along very particular trajectories. They may earn a reputation as naysayers and pessimists; channeling very little energy toward the pursuit of experimental directions which they view as unpromising.

When personally engaging with this subtype (especially when the other party possesses Fe) social signals may be ignored by the NiTe; they will often yield surprisingly direct and honest responses. Indeed, the deadpan can relay information about themselves or their experiences which may be shock-worthy, but with an incredibly calm composure.

The extent of this honest and unfiltered dialogue will, of course, be subject to the level of trust that exists between the two parties. Unlike the TiNe minimalist, who also does not participate in the dance of social protocols, the NiTe won’t flatten conversations so easily; being able to respond quickly and flow uninterrupted from one topic to the next. Their voice may be low-key but cascade as a series of brief comments.

This speech will be accompanied by small, snippy head shakes, shoulder shrugs as well as light body swaying. Actress and comedian Aubrey Plaza is one such example of the NiTe deadpan who has formed a career in large part due to this iconic stoicism and sarcasm. Her many roles, while certainly exaggerating this facet of personality, provide some window into the reactions and attitudes which accompany this subtype.

A similar deadpan sarcasm is depicted in the fictional characer Daria from the 1997 TV series by the same name, who enacts a simplified representation of the deadpan. In actuality, the deadpan’s character is rich with private emotion, unique quirks and atypical perspectives, even though their stoicism may occupy the largest role in their persona.

The thick skin of the deadpan subtype does not lend itself to the sensitivity of Fi, remaining largely unfazed by disturbances or stressors, but when Fi is developed in the NiTe, new concerns arise from the desire for fairness and justice. These concerns often remain hidden behind Te’s stern composure and can exist unnoticed until the NiTe suddenly responds to a comment in a way that reveals a pointed internal opinion. But when a more active consideration for Fi is engaged, the NiTe may go out of their way to articulate these injustices, taking to politics or other public platforms.

We see this pattern manifest in NiTe Zinnia Jones; an outspoken vlogger who addresses the misconceptions and prejudices existing toward atheism, feminism and transgenderism. Being herself a transgender, she speaks frankly about the religious condemnation, social discrimination and phobias often directed against the LGBT community. These comments are given from an unapologetic composure as her face remains ever in line with her steady, unchanging gaze.

The young NiTe Hillary Clinton, before decades in demanding political roles had prompted excessive Je reliance, demonstrated this subtype in a less confrontational tone. In Hillary’s case, women’s rights and women’s equality have been the prevailing themes of her activism. In recent years, she has taken on a more managerial shade quite reminiscent of the TeNi executive. Her gesticulation is exceptionally polished, yet despite this level of modulation, her eyes and the facial division they instigate remains steadfast.

A lighter and more casual composure appears when Se is well favored and the NiTe enjoys more loose and friendly conversation. Like many other high Te users, the NiTe’s flavor of friendly interaction will be indirect; showing affinity without losing their individualistic composure or resorting to seelie Fi energy.

They may be playful but sarcastically so, interacting with teasing and joking; dishing out snarky comments and shrugging off the same. They will combine Te humor with Se real-time observation, giving their commentary a immediately-oriented tone.

Often their remarks will relate to the quality of things around them and they will judge them offhandedly by their level of utility, convenience or inconvenience. For this type, the stimulation and amusement of Se may also derive from probing sensitivities, riling people up and being argumentative. In some the thrill of Se can go as far as to give the NiTe a daring, sensationalist edge.

This subtype’s body will carry more momentum, body swaying and energy than other shades. Their articulation will be witty and brief, delivering individual packets of speech in rapid succession. Indeed, the NiTe sarcastic can be quite talkative and involved in the scene.

However, the sarcastic will not inherit any of Se’s amplitude or intensity. While their commentary becomes more immediately focused, they will not experience an augmentation of presence or feel heavily pulled to connect to the environment. Their eyes will retain all the qualities of Ni, although they will toggle more freely and frequently.

As we discovered from the works of Isaac Newton, the combination of Ni and Te lends itself at times to the pursuit of a connection between the mystical and the empirical. Compared to the NiFe guru, the NiTe mystic will be somewhat less prone to turn his attention toward the experiential and subjective (via meditation and introspection) and will seek more thoroughly to relate elements of reality in some physically significant way.

The alchemy of Newton is matched, in this sense, by the numerology of NiTe Wolfgang Pauli. An acclaimed physicist and colleague to Neils Bohr and Werner Heisenberg, Pauli also appreciated the more archaic origins of his field. He pursued internal suspicions about the significance of whole numbers such as three and four – a topic in which he and NiFe Carl Jung collaborated – and sought to find confirmation for his belief that the number 137 held deep cosmic relevance[1].

Nevertheless Pauli remained the more steely and critical of the two, as their relationship traveled through quantum physics, the I Ching, ESP, astrology, alchemy, synchronicity, dream interpretation, archetypal psychology and many such topics.

We see in their relationship an elegant example of Ni at work – of the journey towards the quantification of its impressions by both judgment oscillations. It is not uncommon to see this subtype of NiTe preoccupied with the unknowable or at times holding superstitions – perhaps even unbeknown to themselves – about how the world functions which carry some logistical grounding but reveal themselves to be rather farfetched.

This abstract detachment from the more concretely causal is different from the abstractions we see in the NeTi or NeFi, whose viewpoints arise more from an active pursuit of alternative explanations than from unsolicited feelings of inevitability. It is, to the NiTe mystic, a sense felt as a necessity.

For a complete account of this type’s vultology, we can look at interviews of the following NiTe public figures: