A cognitive architecture refers to both a theory about the structure of the human mind and to a computational instantiation of such a theory, often used in the fields of artificial intelligence, neural networks and computational cognitive science. The Cognitive Typology Architecture (CTA) is one such architecture that was reverse engineered from human embodied cognition, by examining the most normative features of human vultology across thousands of samples. This article is an overview of the model.

A Mode of Object Construction & Management

Like many architectures, the CTA can be thought of as a mode of computation for handling the construction of objects and their management. Objects, in this case, refers to any units of information as well as the aggregate set of information that sits below that unit in a hierarchy. For example, in a neural network trained to identify written letters, the two legs of the letter “A” would each be objects, as well as the horizontal line that spans across them. But the letter “A” is also itself an object, which can exist in a larger word such as “APPLE”. The word APPLE itself is an object within a larger sentence such as “I ATE THE APPLE.”

The process of objects being nested in higher order objects is called abstraction. Abstraction can happen indefinitely and is only limited by the technical size of the neural network or the architecture. The lower the level of an object, the more concrete it will be. A concrete object may be, for instance, color, smell, taste, touch or sound. These are also objects, even if they are not linguistic forms. Objects can exist as the cognizance of qualia-states such as bright, sweet, loud, soft or coarse — without being attached to those words themselves. Objects will not be attached to word symbols until they have grown sufficiently complex so as to become a meta-category of their own. A meta-concept such as “APPLE” is an abstract object composed of many sub-objects each which register another dimension of the entire object “Apple.” This can be its appearance, its linguistic symbol (the word “Apple”), its smell, its taste and its touch. When the word “Apple” enters consciousness as an object, the entire architecture of sub-objects below it is also primed for action potential.

CTA describes four main processes for the construction and management of objects. These are: Information Gathering (P+), Definitional Processing (J-), Temporal Contextualizing (P-) and Procedural Processing (J+). These four processes comprise the creation, definition, contextualization and manipulation of objects in the mental and physical world. 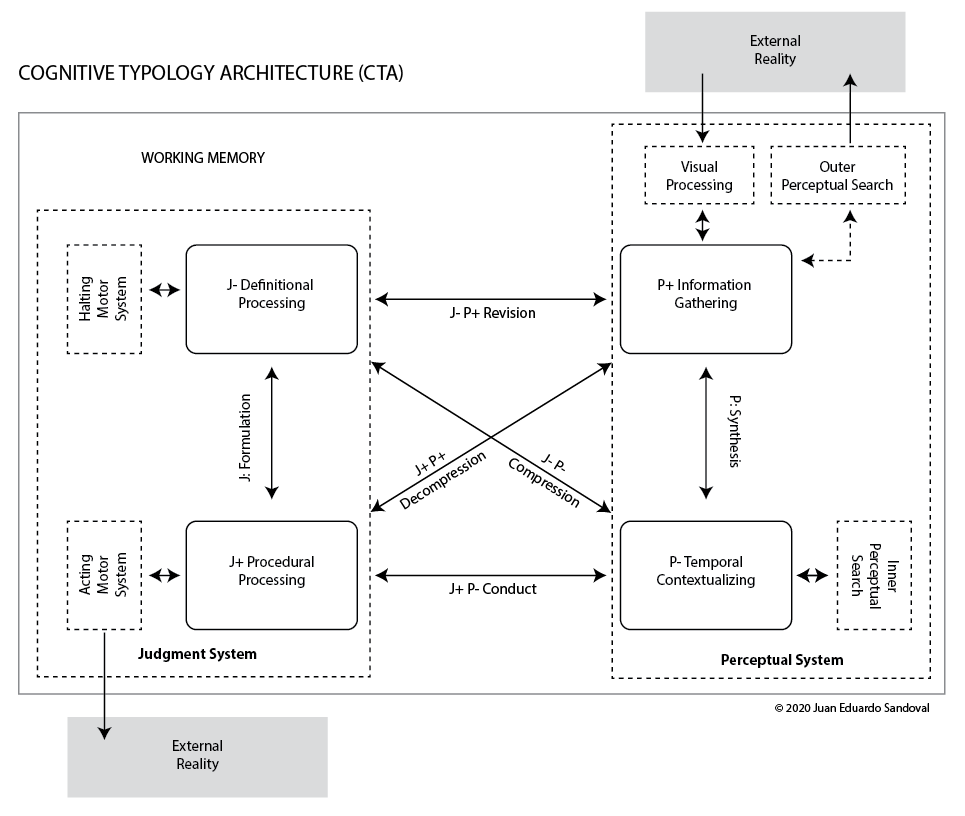 In brief, we can say that:

When combined, these processes allow us to register an object by what sensory properties it holds, how it is distinct from other objects, how it is part of an object-set that spans across time, and how the object behaves in a causal reality.

The Necessity for all Four

Without at least an elementary sense of each of these dimensions of reality, we would not have a proper grasp of any objects. If you lacked temporal contextualizing, you wouldn’t know that the object you just picked up is also the object that is now in your hand. Without procedural processing we would not understand what objects do, and we would have no sense of causality overall. Without definitional processing, we would not know when one thing ends and the other begins, or how to tell things apart. Lastly, without information gathering we would not have sensory properties from which to even construct objects from, as objects require some contingency on information.

Aside from the four aforementioned processes (energetics), the architecture above also has other modules represented here with dotted lines. These are part of the architecture because they participate in the embodiment of cognition in reality. These are, for instance:

A perceptual system would not be complete without a feedback loop between observation and an adjustment of focus towards objects of interest, such as by shifting the eyes. Likewise, a process that understands causality cannot do so without having a feedback loop with causes and effects via the motor system. These systems are just as fundamental to the CTA as the four core energetic processes, as the architecture would be null without being embedded within an actionable body. It is also this contingency between cognition and embodiment that allows us to reverse engineer cognition based on human embodiment, and it is what has allowed us to construct the CTA. Thus, CTA differs from other cognitive architectures in that it is formulated simultaneously as a theory of the mind but also by how the mind would be embodied in the world in order to successfully achieve consciousness.

While the architecture above described the necessary components for object creation & management in all people, not all people have an equal weighting between these four energetics. Weighting here refers to the amount of bias given to the operation when processing information. For example, a weighting [J-: 20, P+: 4, P-: 4, J+: 4] would mean that J- is weighted five times more than each of the other processes. This would mean that if 1,000,000 neural network cycles are executed in the span of a few seconds, ~625,000 cycles would come from J- (definitional processing) and only ~125,000 cycles would go towards each of the other processes. We can roughly illustrate this below: 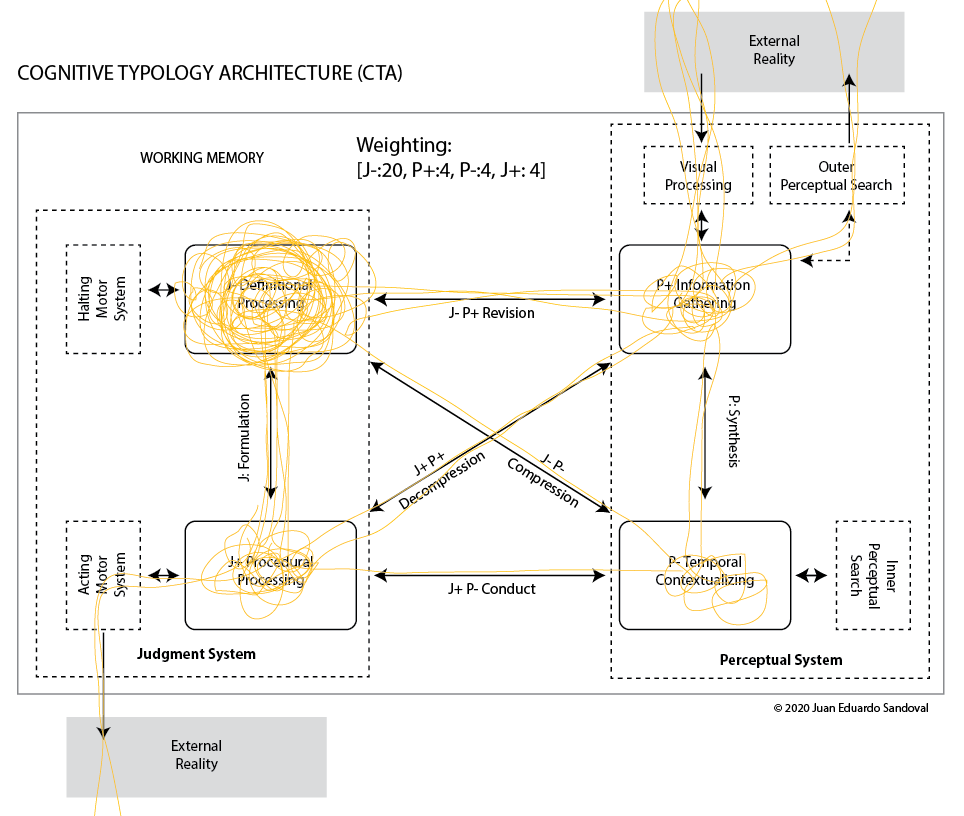 The thin yellow lines represent computational pathways. The lines begin at External Reality (above) and come through the visual system into Information Gathering. From there they make their way to Definitional Processing where they stay for the vast majority of the time. Eventually they flow through J+ and manifest in the external world. The outcome of such a weighting would be a cognition that is hyper-focused on arriving at the correct abstract definition of an object, at the expense of gathering more reference objects (P+), viewing the object across time (P-) or registering the object’s causal behavior (J+).

As we can see, 1,000,000 cycles is enough to have every energetic process represented to some capacity, as well as the conjunction of every energetic with the others. None of those other cognitive activities are absent, but they are represented at lower levels. This means that the definition of the object itself, and how it is seen and treated in the mind, will inherit the prejudices of this weighting/bias. Each of the four energetics can exist with strong weighting/bias. This bias in the computational weighting of objects cascades across the psyche and leads to differences in opinions and thoughts at the highest levels of abstraction. When this weighting is pronounced, an ontological bias may develop in the person to the effects of:

Typological differences therefore emerge in people as a result of this weighting, which causes an overall difference in the treatment of reality — since reality is comprised for us by the objects we register and how we register them.

This bias cannot be combated consciously because it is part of the very process by which we make mental objects such as “thoughts.” When we are dealing with objects sophisticated enough to appear in our consciousness as words/”thoughts,” they have already become mountains of sub-objects that have been processed before getting to our conscious awareness. Thus, what we think of as thoughts are only the final layer of our abstract objects and our ability to arrange these high-level objects via consciousness does nothing to change how these thoughts are created at root. Instead, our thoughts are the byproducts of their automatic arrangement in our mind according to laws of computation that make the building blocks of our thoughts. However, with effort this weighting can be partially adjusted to a more even distributions between the four energetics.

The CTA can be weighted in four directions, giving rise to a typology of four cognitive variants. However, the CTA itself exists in four slight variations in people. Each of these variations contains a complete set of four energetic weightings, giving us a total of sixteen cognitive architecture variants, or cognitive types. These cognitive types experience the construction and management of objects through unique computational pathways, which eventuates into emergent differences in their vultology, behavior and personal mythology. For more information about these variants, see: LM, LV, DM, DV.