The SiFe’s gaze will lead the direction of their head and body, drifting in rhythm with their worldview’s activity as their eyes disengage to the sides in moments of recollection. Their body will carry a viscous, inertial quality, having a fluid yet heavy posture. 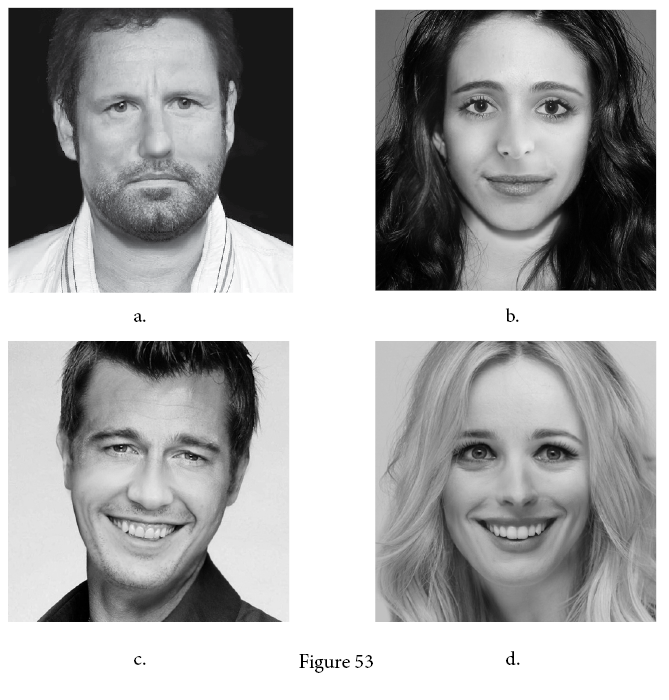 But the SiFe will also have occasional breaks from this posture due to Ne’s buoyant energy. Especially in moments of humor, they may engage in Ne parodies and temporarily emanate a silly and carefree energy, accompanied by strong eye-toggling. Their Fe will also add to this agreeable undertone by calibrating their interactions and moving the atmosphere toward a desired direction.

Being a reactive type, the SiFe also has a primarily resistant attitude toward the world, although this resistance is not decisive or analytically justified to the self; it is viscerally initiated. While they may not view themselves as resistant, the natural flow of their psychology will avoid, whether consciously or unconsciously, that which is unfamiliar to their worldview. For an SiFe, their worldview largely defines their personal psychology and, as with all introverted functions, Si’s worldview will be very specifically formed.

The SiFe worldview forms early in life, through the assimilation of Ne’s unavoidable perceptions, coalescing into a predictable proxy of reality. Now, it is not the case that the SiFe will be exceptionally vivid or detailed in their perception of the past, as they use Ne’s abstract information to construct their sense of reality. As Si itself cannot come outward to perceive, SiFe’s depend on Ne for initial information. 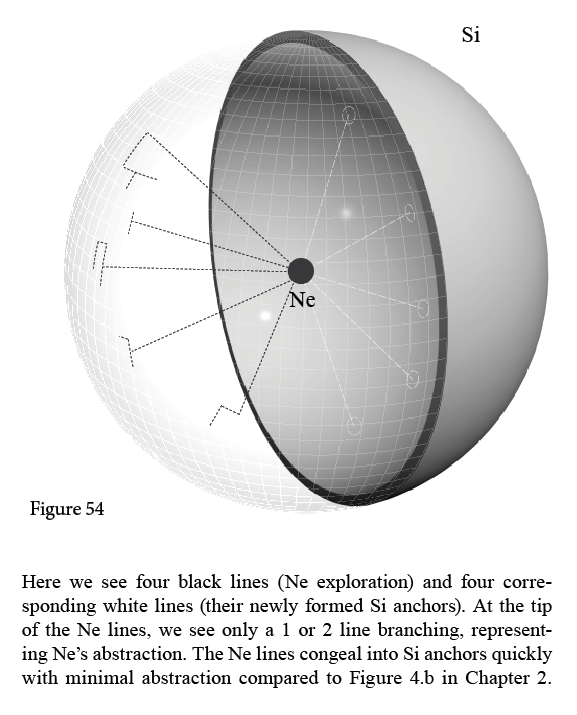 However, because Si is the lead process, the data collected by Ne undergoes far fewer cycles of abstraction before it consolidates into a dataset/anchor, as seen here in Figure 54. During this brief period of cycling, the data does divorce itself from the literal environment but only enough to take a conceptual form.

What is then stored are a series of static concepts extracted from the environment. So while Si does not store literal data, as Se provides to Ni’s worldview, the concepts it stores have a somewhat similar level of definitiveness as Se’s sensory input.

Perhaps the best word we might use to describe Si’s specific form of data organization is trivia. Let us consider, for example, the act of reading. In literature, we understand that the physical ink that lies on a paper holds no real importance – that is to say, the physical contours and geometry of the letters are not registered strongly in the mind. Instead, the ink brings concepts to mind and those concepts, through imagination, are what register as thought.

It is this type of abstracted information, suspended in Ne’s imagery, which Si registers. In the case of reading the process is easy to see, but Ne-Si operates similarly in all situations. A scenery or environment is observed much like written letters; objects are recognized as words, abstracted and then stored in memory less for their nuanced qualities and more for their overall existence.

This is why many Si types such as the TeSi and SiTe may be seen as walking encyclopedias, historians or trivia experts. Si types catalog far more concepts (such as words) than Se types, because Se types focus on the richness of the present and are less eager to compartmentalize the subtle gradients of reality. For Se-Ni types, reading is more commonly a mental simulation of an experience where the expected tactile results of the concepts within writing are what register in mind. What is remembered is the overall evocation and the way it altered or transformed Ni’s tapestry by touching it.

When Si is particularly heavy, this type’s worldview will largely define their character, but because life experience can take so many forms and paths, the best way to define this subtype’s external manifestation is as a frozen instance in time of whatever era they grew up in.

The philosophies and normalities gained during those years will define their fundamental flow and this flow will be very slow to evolve. Now, it is not true, as many typologies have depicted, that the SiFe type is any more prone to desire external organization than any other type. Quite the opposite, the SiFe is not a judgment type, and when heavy in Si they will generally fret little over keenly controlling the external world (unless such is their specific storyline).

They may only bother with systemization when it resonates personally with some nostalgic habit or personal ritual. Hence, the SiFe traditionalist is more of a Nostalgic. Like Ni, Si will simply feel a visceral resistance to erroneous information and a desire to exist as fully as possible with only the information already attained.

To give an example of how differently this can manifest, we might take an SiFe whose youth was spent during the 1960’s cultural revolution (the Hippie movement) and another whose youth was spent in the Vietnam war. One may have learned that the key to being ethical and respectful is to value freedom, absence of judgment and acceptance.

They may manifest as an entirely carefree soul, choosing much more to live a recreational and unobtrusive existence rather than to fret about the affairs of society or other people. The other may have learned that  “life is a challenge”, that perseverance is the most important virtue and that one must possess a stable character. Both of these individuals will be SiFe traditionalists and be unmoving in their storylines, although manifesting greatly different views.

This happens because Si’s trivia based worldview will inescapably form by collecting the memetics of the present as seen by Ne. The tapestry of Si will be more tied to the memetic culture of its time – to the novelties and ideas available – than to extracted overarching patterns as happens for Ni. And when Si strongly resists new input, what is left is only what already exists in the psyche, causing this past-based reinterpretation of present reality. In general, Si lead types will appear more traditional than Ni lead types although both equally resist new information.

This is because Si lead types carry a worldview largely contingent on the more static, situational datasets present during their development. In contrast, in all ages Ni’s contours can be quite distinct from its environmental upbringing or era although it may likewise stay ever fixated on its own early-formed views.

When Ne is especially heavy, the SiFe will be dual in expression, finding themselves in a pickle between the new and the known. They will thirst for fun and novelty but always feel a calling to something more familiar after the fun has been had, making them oscillate between bouts of silliness and seriousness.

For the duration of the swing, the SiFe may rival an NeTi in buoyancy and liveliness. Their eyes will light up with Ne’s spark, their demeanor will loosen and become more receptive to improvisation, making use of witty references, old puns, and all manner of humor. However, when looked at more closely, the silly-serious will be generating this momentum largely out of themselves rather than through a high level of realtime information absorption.

Humor will come more from old gags, rehashing of parodies, and phrases/remarks they found novel in past occasions. Because of this, the SiFe silly-serious may overuse these gags when around familiar people extensively, sometimes beyond their natural expiration date.

At other times their expressions may be more immediately attuned to the moment and allow for more spontaneity. The SiFe will generally feel uneasy about giving Ne such free reign, especially considering the social awareness they receive through their Fe. But occasionally the SiFe will find a special channel, whether through a proxy persona, a prop or tool, which gives the expression a more anticipated, and thus appropriate, context.

We see this in the world-renown ventriloquist SiFe Jeff Dunham, who uses his various puppet personalities to express humor which may otherwise be appalling if presented from a direct human voice. Through his various puppets he relays also a diversity of personal voices and perspectives, using his art as his vehicle of self-expression. Dunham, now in his fifties, took up ventriloquism at the age of eight and has dedicated his adult life to this trade – a craft which is neither traditionally practical nor financially meritorious – out of a personal love for the art. He remained largely unnoticed for most of his career until the internet age made his videos go viral. His story demonstrates the SiFe’s occasional attachment to (and perpetuation of) early-felt nostalgic past-times independent of factors which might aim to depreciate their sentiment.

Another example of the silly-serious can be found in SiFe James Franco and his TV alias Dave Skylark. Like TeSi Stephen Colbert, Franco plays a secondary personality and through this character he is liberated from his own reputation and allowed to be as idiosyncratic as he’d like. Franco has also performed other parodies of himself through films such as This is the End (2013).

The SiFe, when engaging their Fe more actively, will manifest what we might call a parental disposition. This disposition exists independent of the SiFe’s literal possession of children. It is instead a natural result of Fe being a subordinate process to Si. As the Fe-Ti pair comprises this type’s secondary oscillation, pursuits of Fe socialization always occur within the context of their worldview’s overarching sense.

What results is an Fe that manifests and articulates through a series of lessons and paradigms; the SiFe will counsel others on what has or hasn’t worked for them in the past and make this an inherent part of their conversation. They may find themselves parenting not only those younger than them, but also their peers and perhaps even those far older. The tendency to parent is a rather timeless attribute of this type, making them the eternal parent.

But when the SiFe engages in this advisory role while having a deeply fixed Si worldview, they will open the door to heavy social friction. They may argue for a certain morality or rationality while not being fairly or equally receptive to the arguments of the other party.

Unlike many judgment types, who will debate for the purpose of mutually reorienting their principles, the SiFe may debate only from the inertia of their existing perspective will little desire for a true modification of principles. When debating with this subtype, one might feel that the SiFe is a “broken record”, repeating the same position while being wholly closed off to any significant feedback.

For a complete account of this type’s vultology, we can look at interviews of the following SiFe public figures: