Why you're probably not INxx in CT

The vast majority of people who come into the Cognitive Type community come from a Myers-Briggs background in which they identify as INFJ, INFP, INTJ, or INTP. And the majority of them are none of the four. This article is dedicated to explaining why this is, and what you might expect of your visual typing results -- based on the demographic data we have so far. But I'll start with the punch line first, and go into explanations afterwards.
If you've come to Cognitive Type at this early stage of its construction, you're most likely an Explorer (Pe) type. As of May 2020, our confirmed forum demographic spread appears as:

As you can see by the numbers so far, the greatest demographic is that of the Pe-leads, with 71 total, followed by Ji-leads with 48 total, then by Pi-leads with 19 total, and lastly Je-leads with 13 total members represented. This means that even when Ji-leads and Pi-leads are combined (48+19 = 67) they still don't match the Pe-leads.

Why does this happen? 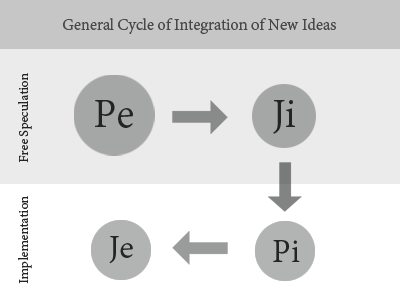 This demographic distribution is actually perfectly in harmony with what we would expect, given the nature of the CT project and energetic quadrants. The Explorer type, as its name implies, is he who explores areas that have not yet been charted. Like a scout, the Pe-lead type is the most open to new information and willing to suspend previous conceptions. For an innovative project like CT, the types most likely to give benefit of doubt are Pe-lead types, followed afterwards by Ji-lead types - both being reviser types. And as we would expect, the conductor types (high Pi + Je) are less represented, due to their greater proclivity to value projects that exist at the later stages of implementation. Therefore, this demographic distribution reflects the nature of innovation, as a whole, as it passes through humanity at large.
As the CT project matures, and approaches later stages of world-implementation, it will attract a greater number of Pi-lead and Je-lead types, but for now the most likely types to investigate the topic are Pe-leads, due to their very cognitive disposition.

The above is the technical explanation for why Pe-leads are more likely to appear in CT, at present. But lets explore the topic of a new member's likely self-typing before approaching CT. It is typically a shared intuition among veteran MBTI enthusiasts that there is a biasing towards the four INxx types, due to the way they are described much more colorfully, vibrantly, intelligently and uniquely, as compared to the other 12 types. However, these four types are described with a level of complexity and nuance that is true of all human beings.
A person's affiliation with an INxx type -- on account of believing they are a highly conceptual thinker, contain a vivid inner world, thinking profoundly about all important questions of reality, and paving their own path through life -- is a demonstration of the Barnum Effect. There are few people who do not possess these qualities, as they are the definition of a human. And any proclivity to disbelieve in this complexity's existence in other people comes from our own ignorance, as we do not know everything that goes on in the minds of others and therefore always tend to assume they carry less sophistication than us.
However, because many renditions of the MBTI attribute this fundamentally human baseline of inner complexity to the INxx types, it becomes the primary self-report agreement among those of all types who are simply preoccupied with questions of personal identity and truth. Therefore, in practice, the MBTI generally contains only 4 probable types (perhaps 8 if the ENxx types are added). To read more about why specifically this happens, you can visit this article.

Therefore, the most appropriate expectation to have, when coming to CT, is that you will likely be a Pe-lead type, or perhaps a Ji-lead type, with NeFi and SeFi currently being the most represented. If you identify as an INxx type, you will likely not be NiTe/NiFe/TiNe/FiNe in CT, but that doesn't mean you lack any of the features that you thought you had in other systems.
Being typed, in CT, as a non-INxx type is not a revocation of your inner complexity or the vividity of your inner world. This is simply something understood to belong to all persons, in CT. However, it can be a revocation of any projections we might have about the apparent lack of complexity sensed in others. Cognitive Type very quickly shows, by way of tangible examples, that every type can be a vessel for the highest genius and the highest stupidity. And I hope you will see, via the database, that in CT these four types (NiTe/NiFe/TiNe/FiNe) are not held above the rest in any way, but that every cognitive apparatus is far more interesting and infinitely genius when looked at for what it is, than what any sixteen caricatures can ever portray.