Why we're not the Best Judges of Ourselves
November 4, 2017 | By Auburn 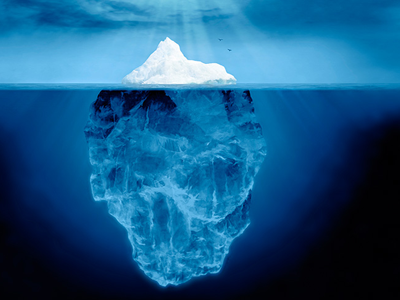 Recent advances in neuroscience are confirming hypotheses first posited by the early psychoanalysts of the 20th century (Freud, Jung, Adler) pertaining to how the aspect of our mind that we identify as the "self" or "I" plays only a minor role in the overall creation and direction of our brain functioning and thoughts/actions. Studies have shown that an estimated 95% or more of our cognitive processing (Zaltman, Gazzaniga, Morsella) happens entirely beyond our awareness, and without any conscious consent from this "I" that holds our self-concept. This has awakened research into the reality of the unconscious, as it becomes increasingly clear that our conscious self sits at the top of a vast network of neural activities which we neither orchestrate nor control. Our awareness constellates in us outside of any deliberating mechanism we have, because the part of us that is the deliberating facet emerges itself as a byproduct of this complicated but automatic activity.

The Evolution of the "Ego"

This small deliberating aspect - the "I" or the ego - is the part of our brain that is capable of reflecting on the existence of itself. But the ego, while able to notice its own existence, does not truly decide what that experience is. By the time a thought pops into our heads, it has been metabolized through a long series of calculations which operate in sophisticated rhythm. We don't decide what we think; these thoughts populate into our awareness unbidden, and we perceive only the final stage of this long chain of events.

But why would we have an ego? Why do humans possess this ability and what is this ability (ego) for? It is important to remember that humans are part of the animal kingdom, and the development of our ego is a very recent innovation - one due not so much to brain size but to a sudden reorganization of the information within it. Yet the majority of our brain structure still reflects that of other mammalian species, complete with the instinctual/motivational drives that compel us forward in life. Our capacity to self-reflect does not change the reality that the majority of our nature is designed for practical survival, and this includes the development of the ego. In the words of Dr. Jordan Peterson:

As with all evolutionary advances birthed by selective pressure, the incentive behind our development of the ego and self-awareness was not to attain a more objectively true metric of reality, but to facilitate greater agency in the world. We have this sense of self so that we know how to interface with the environment more effectively. Our ego serves to help us mediate the phenomenon and organism that is us, against the requirements brought to us by reality.

The construction of the Ego-image 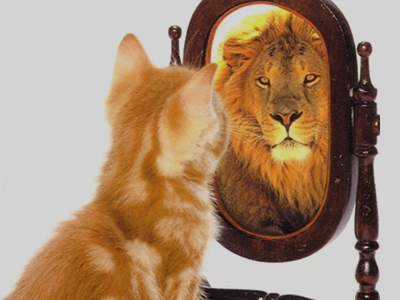 Our "self-concept" (or ego-image) is something we construct for the pragmatic purpose of answering the demands of physical and social life - who we are, what we want, and what we want to be. It is something we fabricate, partly through our cumulative experience of our own actions and partly as a tool for self-direction via a formation of a personal narrative that facilitates our navigation in the world.

We may see ourselves as "the responsible one", "the artistic type" or as "a good father". These labels help draw a boundary around our identity, and give us a sense of direction. Growing up, a boy may have been called a wimp by his father for his sensitive temperament and eventually grew to resent this side of himself. He felt a need to consider himself strong, stoic and rational - so his ego image developed in that direction, causing his opinion of himself to shift from feeling to thinking. A haughty and overbearing daughter may be teased constantly by the boys for her manly attitude, so she develops sensitivity in order to curve the effects of this social pressure. And now if anyone mentions that she is a brash personality, she may object firmly - insisting she is a sensitive individual.

Much of our ego image deals with the feedback the world hands back to us, and what is necessary for us to believe of ourselves at any given time. Our ego-image is not static; it's dynamic. Who we think we are changes. Hence our ego image is not intended to be a longstanding truth about the organism that is us, but a type of vector through which our self-concept is operating through; the lens through which we view ourselves and from which our actions will emerge. But if this is true, how then can we know who we are behind the ego image? How accurate can our perception be, regarding the essential and unchanging qualities in us which lie at the root of this evolving narrative? 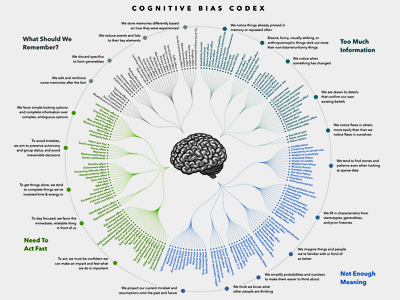 Countless studies have been performed on our human fallibility when it pertains to ascertaining reality, and especially elements of ourselves. We overestimate our capabilities, underestimate our flaws, we're prone to acknowledge that others are bias but not see the same bias in ourselves. With over a hundred documented shortcomings in our perception and judgment, it's undeniably clear we are not the most equipped to grasp who we are. Yet we often hear it said "nobody knows you better than you" or  perhaps "nobody can tell you what you are, that's something you decide" - but that is far from the truth. By the very fact that we exist as us, we are innately not unbiased about ourselves. If such a notion were true, the field of psychology would not exist nor would we need therapists to illuminate us towards our behaviors and their underlying causes.

The suspicion that we, by virtue of being seated at the helm of our minds, have some special authority to dictate who and what we are, is a cultural myth that is all but disproven. As with any measurement, we need an outside perspective. In a kind of trial and error process, we learn who we are by what we evidence typically in the world and how we are received by others. We don't decide who we are; we discover it. And this discovery process is the work of a lifetime.

In the same way we aim to truly understand any other facets of reality, an objective measurement is indispensable for a complete understanding of us; a metric that is beside the opinions we have of ourselves is necessary to correct for this cognitive bias. 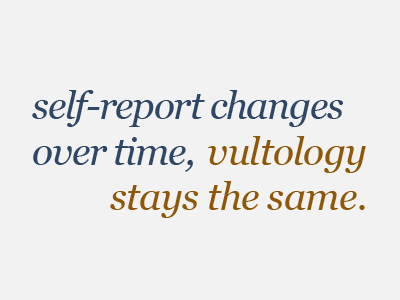 Among the least consistent approaches one could take to this challenge is self-report; a psychometric angle reliant on the perception of the person in question. Due to their dependence on the opinions of the subject themselves, a psychometric instrument can only help identify and confirm your ego-image, since it is essentially a gauge of a person's ego-image. We will feed it the answers that we feel describe us and it gives us back a reflection of what was put into it. And because we're answering it from our own point of view at the time, it changes if our ego-image changes in a year's time when we retake the test.

Another approach, used by CT, is vultology - which measures the unconscious micro-expressions a person produces as a result of their brain activity. Vultology bypasses the behavior-dependence of psychometric tests and directly measures the rhythm of processing a person is using to formulate their thoughts/ideas unconsciously. And while self-report changes over time, vultology stays the same. A report of 20 pairs of identical twins found that 100% of them shared the same micro-expression signature despite 5 of them having been separated at birth. This evidence strongly suggests that the micro-expressions we elicit unconsciously emerge from our innate cognitive processing - and are dependable as a metric for identifying our unconscious pattern of activity.