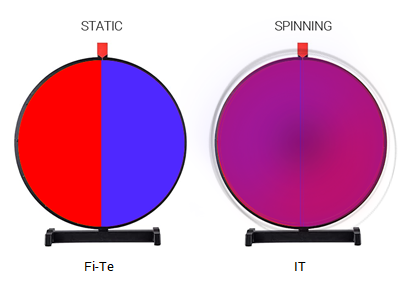 The IT compound function is an emergence born out of the combined activity of Fi+Te (D), processing at the millisecond scale. The oscillation of a function axis from one pole to the other happens many times per second as our cognitive architecture works to give us an unbroken real-time awareness of our world. As a result of this, the two poles create a third byproduct in the same way that a color wheel with two colors would create a third color blended from the two, when spun up rapidly. In this case, the activity of Fi + Te combine to produce an attitude conjunction of I (from Fi) and T (from Te), into an I+T attitude. And although it shares the same general attributes as Ti, it is computationally different from Ti, as found in the Ti-Fe (L) axis. The IT compound possesses none of the metabolic properties of Ti-Fe (L) because it comes from a metabolic origin within Fi-Te.

The IT compound is produced when Fi’s essentialism, as a Ji function, is directed towards Te’s objective & abiotic domain of inquiry. What results is a highly theoretical and principle-based concept of objective abiotic truths, such as those investigated in formal logic, mathematics and physics.

If Mary Sue is at work until 5pm,
and her kid needs to be picked up at 4pm,
then Mary Sue won’t be able to pick up her kid.

This can be modeled as:

This is a procedural calculation of vectors (Je). Te is the function in the Fi/Te type that handles vectors and object-to-object calculations of this sort, whether they be actual or conceptual. When actual, they can manifest as a mechanical awareness of the world, such as in engineering. When conceptual, they can manifest as a theoretical awareness of object mechanics, such as in economics. However, when Ji’s essentiallism participates in this process, the person turns toward understanding the principles of vector-movements in an abiotic conceptual space. From this conjunction (of Je/Ji) arises a formulaic theorizing about the systemic nature of causality in a decontextualized sense. This causes sterile model-building to occur since vectors and their relationships to each other are defined within a type of perfect, monistic description (Ji). Models of this sort are those we find in the philosophy of mathematics, theoretical physics, and the rules of formal logic.

Unlike the aforementioned IT, the Ti process, by contrast, is wholly non-procedural. It does not hold itself accountable to cause and effect relationships, nor is it systemic (J+) in its formulation of logic. The Ti process is by itself perpendicular to formal logic. Being a J- process, it operates by gestalting towards answers in a way that is decontextualized. Ti is an idiosyncratic process that privately evaluates the internal consistency of an abiotic object via a personal metric that is not dependent on object-relations. It is not explicit (+) or objectively formatted (+) and thus not beholden to ‘rules of operation’. IT, on the other hand, is still composed in relation to an objective (object-relations-contingent) system, and deduces within that system towards its conclusions and what is correct.

Due to J-‘s monistic caliber, correctness, for Ti, is more appropriately described as the registration of an abiotic object as having a high mono value. This registration of mono value follows directly from the computation of J- alone, absent of any system of deduction or relationships to other objects in a deductive sequence. This results in Ti’s insights being far more unavailable to the objective world, and based on an internal registration of static object coherence from the a prior of J-‘s mono function.