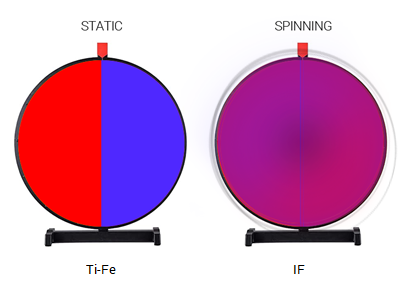 The IF compound function is an emergence born out of the combined activity of Ti^Fe (L), processing at the millisecond scale. The oscillation of a function axis from one pole to the other happens many times per second as our cognitive architecture works to give us an unbroken real-time awareness of our world. As a result of this, the two poles create a third byproduct in the same way that a color wheel with two colors would create a third color blended from the two, when spun up rapidly. In this case, the activity of Ti + Fe combine to produce an attitude conjunction of I (from Ti) and F (from Fe), into an I+F attitude. And although it shares the same general attributes as Fi, it is computationally different from Fi, as found in the Fi-Te (D) axis. The IF compound possesses none of the metabolic properties of Fi-Te (D) because it comes from a metabolic origin within Ti-Fe.

The IF compound is produced when Ti’s essentialism, as a Ji function, is directed towards Fe’s objective & biotic domain of inquiry. What results is a highly personalized ethical system, and system of inner ethical alignment — which is nonetheless held as an object that the self is measured against.

IF: Piousness In Relation to a Self-Crafted Object

The word ‘object’ here is of critical importance for understanding its difference to Fi. In this function, the person is still in relation to an object, whether that be a concept, a personal protocol, standard or even a one-person ideology. There is always something that mediates between the person and their ethical behavior, and this ‘something’ is always beside oneself. The IF compound often promotes values that deal with rectifying individual behavior, such as via personal dignity, honesty, authenticity and integrity – but they do so by an appeal to an ethical (F) system (Je) that is non-identical to them. This causes the IF user to need to ‘live up’ to their own values, which is a different type of relationship to ethics than what we see in Fi. The Fi function, being J-, is non-systematic but more gestalt and aesthetic in nature, working more automatically by attuning to essential embodied resonances/dissonances (biotic monistic caliber) outside of a formulaic/regimented idea of conduct.

The IF function begets a self-crafted intermediary structure (system) that sits between the Ti user and the world. And because this intermediary structure is non-identical to first-person mono resonance/dissonance, it can be tyrannical to the self. The Ti-Fe user may adhere to the structure if they’re convinced of its universal rationality, even though they themselves feel far away from it. The visceral instinct and intelligence of the body is not allowed to fully guide the process, but it remains in some way an intellectual endeavor. Thus, the role of IF in a person is more akin to that of a nun — a person who is pious, held to some standard, but who is nonetheless operating through a system or code — even if self-constructed – that binds them. This binding to a self-created code has the same effects on the Ti user as would a socially imposed code, leading to effects such as the “transmutability of the soul” towards the object.