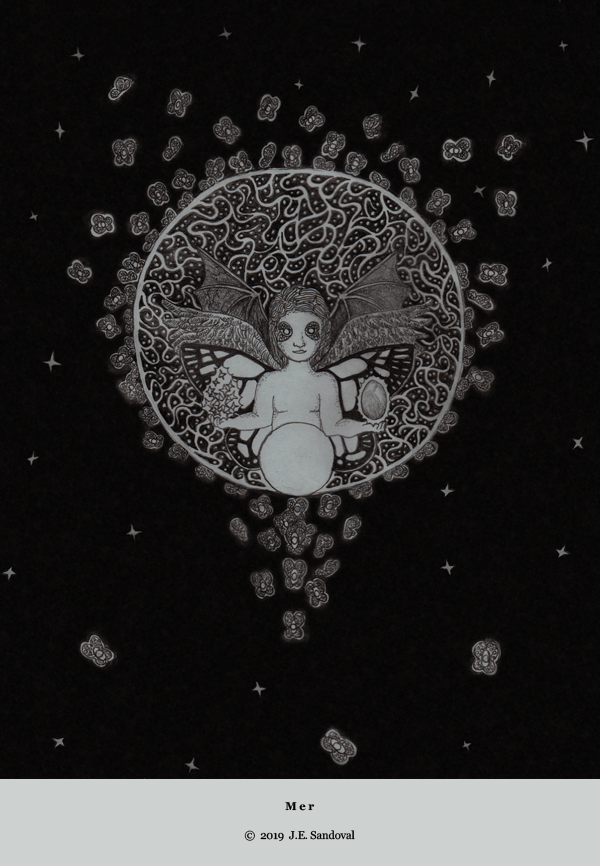 A child holding a golden egg in one hand and stars in the other. It has six wings – two of a butterfly, two of a bird and two of a bat. It has stars in its hair and butterflies for eyes. Behind it is a spherical maze of interconnections woven around small speckles of light. Around the spherical maze are butterflies landing on it and scattering out into a star field.

The golden egg represents good luck, fortune and miracles. It also represents rebirth, new life and optimism. The stars in its other hand represent wishes and dreams. The stars adorning its head represent a dream-like consciousness. The butterflies it has for eyes represent the whimsical and fluttery pattern of flight its eyes have. These eyes are the same eyes that hover in the star field, as each butterfly is an eye with wings. This represents Mer’s curiosity, which sprawls into all places and is always watchful for new sparkles of light to bring into its collection.

The sparkles of light contained within the maze of interconnections represent existing and treasured ideas. The butterfly-eyes landing on the maze represent the gathering of new sparks of light into the maze from far off places. The star field represents the unknown and the unconscious.