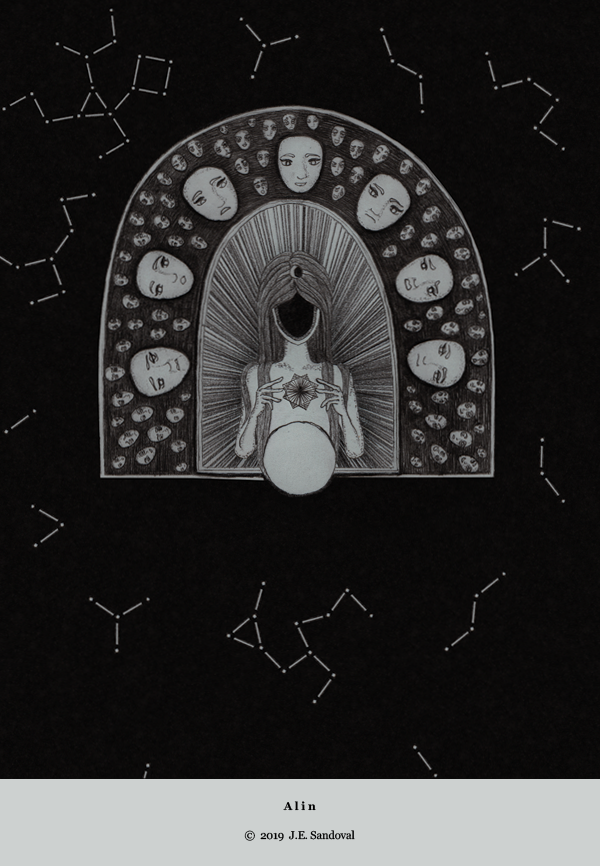 A woman with a crystalline void floating between her outstretched fingers. She has no face, but has long hair and a diadem with the moon in the center. Behind her is a throne made of lines converging towards the crystalline void. Outside the throne are seven faces each with a different expression, and dozens of other faces surrounding those seven. Behind that is a black field with a series of dots connected by lines.

There was once a prince who lived in a palace filled with ceremonies and festivals. The prince was brought up with all the prince-like courtesies, and he knew all the musics and customs. He spoke every right word and was praised by the kingdom as an honest and just prince– fit to take the throne one day.

Then one day as the boy was strolling around the park, he encountered a blind man. The blind man told him “move out of my way” and the prince said “don’t you know who I am?”

And the old man said “you are a disrespectful young boy”

And the prince said, “I am the son of king Alerion”

“And if his crown was stolen, who would you be?”

“…I…I guess I would be the son of Alerion nonetheless”

“And if his name wasn’t Alerion, but Stragos, then who would you be?”

“Well.. then I would be Avalin son of Stagos”

“Tell me boy, are you nothing more than your blood, the name of your father and his crown?”

“I pity those who find their soul in material, blood, and crowns. They do not know who they truly are. Now move out of my way, for I have somewhere to be.”

The next day the prince was at another ceremony and was greeted by a peasant woman saying “Hail, Avalin son of Alerion, the virtuous man of the land! You are the same, as you are your father’s son.”

And the prince was about to offer his graces back when he found himself hesitating. “How can I be virtuous on account of my father’s virtue?” he asked. And he resolved that day to not take any compliments in the name of his father.

Next he resolves not to give courtesies, for they are not his own words of kindness he feels. His father became upset at him, and asked him why he is not playing courteously the role of prince.

“All things we say are not our own things” the king Alerion said “They are things we must say to do well in society.”

“Then I shall never speak again, lest I speak untruths” said the prince, and from that day on the prince spoke not another word.

The boy tossed away all his flashy clothes, removed his jewelry and abandoned the castle and went to live out on his own, journeying to try to uncover who he really was – outside of blood, name or crown.

Then he came to the lake and looked into the water as a mirror …and realized “This face is not mine” …and he saw that there was a seam across his neck. Curious, he picked at the seam and pulled it upwards and his whole face came off!