More commonly, however, the FeNi will be directive. They will be the creator of their own ethical values and resulting protocols, often playing the role of social engineer; crafting themselves and the situation they’re amidst to align with the communal order they see as rational. 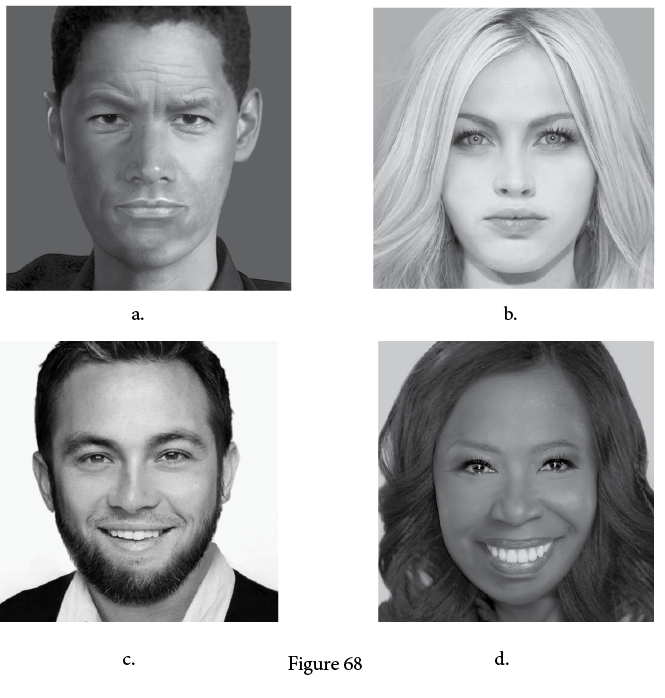 The eyes of the FeNi will have a less eye-centric focus than those of the NiFe, but still be relatively steady when contrasted against the FeSi. In the NiFe, the eyes are heavily zoned out; the muscles around the eyes are peeled back in unison with few other resistances or internal muscular conflicts.

For the FeNi, Ni manifests not in an absolutely hypnotic gaze, but typically in an Ni scowl formed by the collaboration, and the clashing, of all facial muscles surrounding the eyes, as seen in Figure 68.a. In this sense, the eyes of the FeNi are more reminiscent of the manic eyes of the TeNi, but the FeNi’s eyes will tend toward a more heavily lowered eyelid as opposed to the TeNi which has more Se intensity in the mix.

When the FeNi develops a particularly forward attitude, leading their social circle with charisma and energetic exchanges, we encounter an alpha male or female personality. This type will certainly use directive Fe, establishing a culture and atmosphere that will emanate unbroken across the group’s circumference. Unlike the more diplomatic FeSi, this type will join their group together using linearity of vision.

This linearity will result in less adaptability or receptiveness to feedback from those under their wing, as the FeNi may feel that the group’s efforts must be carried out in a very specific way. As such, often this cultural atmosphere may weigh heavy on those involved in the form of pressure, obligation and guilt. We see this social dynamic accurately portrayed in just about every Hollywood role played by FeNi Denzel Washington, such as through John Quincy Archibald, Frank Lucas, Tobin Frost and Alonzo Harris.

Denzel’s roles, in which he always gifts his own FeNi nature, range from loving and fatherly to cunning and manipulative. In each role he is either holding unanimous social control or is striving to regain it while faced with many ethical decisions, as is often the case for the FeNi alpha visionary. One famous example of this personality can be found in the late FeNi Steve Jobs, who struggled to sensitively manage his coworkers, often asserting a stressful level of emotional control over them and prioritizing his vision above collective ethical principles.

While this represents an extreme example of the alpha FeNi’s shortcomings, it does not speak for every case of this subtype. The FeNi alpha visionary can equally represent balance, fairness, respect for human life, and necessary societal change as we see in FeNi Martin Luther King Jr.

The second facet that constitutes the FeNi alpha visionary is the marked influence of mysticism and esoteric views within their philosophies. In many ways, the alpha visionary is the aspiration and realization of the NiFe contentious visionary. We certainly see these influences in Jobs, who spent much time in Japan and under the teaching of Zen Buddhism, but perhaps more heavily in FeNi Bruce Lee.

Lee presents us with a personality that is every bit as self-regulating as Jobs’ (the FeNi holds themself first and foremost to the protocol which they outline for others), setting very high standards of efficiency, willpower and personal mastery. The self-regulation of Fe merges with the somatic focus of Se, giving rise to a mind-over-body approach. In this philosophy, the mental and physical converge both in the personal and cosmic sense.

A purpose lies behind each action and these acts are woven together in their trajectory by Ni’s concept of life’s overall destiny. The alpha visionary uses their supportive Ni to cohesively intertwine ethical principles and navigate life through a consistent paradigm.

When the FeNi holds a more adaptive, yet still parental, Fe we come to see more emphasis given to emotional concerns. Vision becomes less important than considering the specific needs of those before them and the FeNi takes a more personal interest in people rather than following an overarching worldview which excludes such fine, anecdotal detail.

Oprah Winfrey is perhaps the most iconic case of this FeNi in America, having spent her career working through and detangling the emotional challenges of many individuals and demographics. For over thirty years Oprah fulfilled, in a sense, the role of oracle for the entire nation.

We see this subtype again in Iyanla Vanzant, whose style of counseling focuses on family challenges. In the oracle, the emotional register, its causalities and resolutions always take a front and center role, and in time the FeNi becomes well adept at understanding and managing the human condition.

A somewhat different variety of the oracle can be seen in advisors such as FeNi Drew Canole: a health coach and motivational speaker who touches on topics of self-esteem, positive thinking and the law of attraction. This variation of the oracle, much like the shaman of many ancient cultures, comes equipped with some special trade or practice and their spiritual counsel is interconnected with, and emerges from, their practice. There is often an emphasis on the connection between the psyche and physical wellbeing, allowing for alteration of one’s attitude to catalyze bodily healing and vice versa.

Like the SeTi sensationalist, the FeNi can also develop a strong affinity for gaming social interactions with the stride and swagger which defines a beta type’s signature charm. As was mentioned of the alpha visionary, self-discipline can become a heightened concern for the FeNi and this concern extends to self-presentation; persona.

Although all types will craft their persona to interface with the external, the most intense crafting is often done by types with a strong influence of Fe. The persona-sensitive FeNi is one such example that engineers a presence which can, according to the present culture, convey a desired affiliation or style. Unlike the indie artist FiSe, who crafts a persona from the internal resonance of Fi, it is important to the FeNi that their persona be understood by the general populace – obliging them to find creative yet contemporary means of building this personality.

In this sense, the presona-sensitive FeNi’s creation is engineered in part by them and in part by the inescapable stereotypes and associations available in their environment. There’s a subtle air of conceit to this subtype as well as a sensual undertone. We encounter this subtype in the film Hitch (2005) where FeNi Will Smith plays Alex Hitchens, a date advisor who specializes in the art of engineering personas for other men. In this sense Hitchens is comparable to a more charismatic form of TiSe Christian Hudson.

It’s not always the case that an FeNi decides to craft a community around themselves or a persona to explore sensation. At times an academic direction is prioritized and knowledge is sought for its capacity to better inform them on the nature of man. We see this subtype in political commentators like Cenk Uygur who take an interest in psychology, political structures and the way they build and collapse world powers.

In this sense, the FeNi academic’s pursuits are not without an underlying ethical agenda. We find this to be the case even in more dispassionate fields of study such as math and physics, where our understanding of the natural world is related back to the human element. Astrophysicist Neil DeGrasse Tyson is perhaps the most iconic modern example of this subtype of FeNi. As a science communicator, he relays a strong appreciation for nature and highlights the capacity for a prioritiy on education to enrich our society.

Derek Muller likewise exemplifies this iteration of FeNi – broadening public awareness of science by presenting counter-intuitive ideas to mainstream audiences in a personable fashion. These types will hold their ethical-logical pair in equilibrium, understanding the duality of the primary oscillation.

For a complete account of this type’s vultology, we can look at interviews of the following FeNi public figures: