Te as a process is simultaneously proactive and dispassionate; it is a marriage between two seemingly contrary dispositions. While it exerts energies outward in a passionate form, this passion is cold and disassociated from emotional concerns.

The combination of such forwardness with absence of feeling creates a very crass function. Without the consultation of neighboring processes, Te deduces, differentiates, and organizes mechanically and insensitively. However, its omission of extraneous emotional factors is what primarily facilitates Te’s ability to be faster and more efficient in its execution than Fe. Te will cascade from one relational deduction to the next with far more ease, and this is because it remains unhindered by the ambiguity that often surrounds ethical considerations.

While both Fe and Te track and adjust to dynamic variables, Fe’s process is slowed by the methodical consideration of each environmental variable’s real-time position and relation to human instincts. Whether or not the topic at hand directly involves emotional causalities, at the very least, Fe will always execute an additional layer of processing to ascertain that indeed the topic has no social impact on the parties involved.

Te follows a far more acute, linear and logistical deductive route which does not have a social apparatus native to its operation. For Te, social adaptations, or the implementations of conduct, arise from an understanding of their logistical sensibilities rather than from an inborn urge to personally touch and shepherd another person’s emotions.

As a direct reflection of Te’s streamlined psychological attitude, its gesticulations are equally marked by briefness and quickness of execution. They will carry a different tempo than Fe’s gestures, being snippy in their delivery and earlier in their repetition.

Each gesture escalates to high velocity very quickly, and sustains this velocity until another gesture of equal velocity shifts its trajectory, or its momentum gradually dissipates without interruption. Below we see an example of Te’s rhythm of gesticulation. 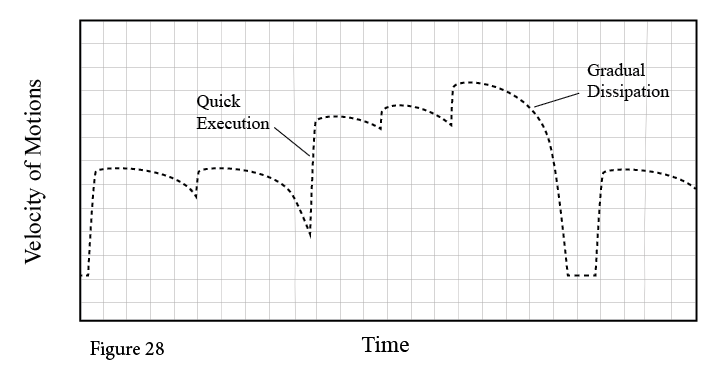 As you’ll notice, every motion has a steep acceleration curve, a plateau in which it retains this acceleration, and a gradual fall. In some cases the rigidity of judgment may abruptly stop motion altogether; giving the pattern a sharp rise and sharp fall with a steady plateau in the middle. This is opposite of Fe’s expressions which have a definitive peak/climax to each motion, rather than sustaining gestures at high velocity for a prolonged span.

During this plateau period, the Te type may rattle their head back and forth quickly and continually, shrug their shoulders or raise their eyebrows in the process, as their articulation delivers a stream of expressions with little, if any, intermission. When unseelie Fi is heavily influencing the emotional disposition of the Te type, this snippiness will tend towards a sassy and passive-aggressive attitude.

The emotional independence of Fi combines with Te to give expression to its disapproval, but this disapproval will be conveyed through the snappy articulation of Te as an acute and brief distaste. Oppositely, when seelie Fi is strongly present, a Te user’s snippiness can be significantly reduced, leading to a soft and liquid flow of articulation.

It will nonetheless retain its cascading and unbroken flow, transitioning from one deduction and expressive motion to the next with a nearly uniform velocity, whether that velocity is fast or slow. It will not oscillate between halt and push as Fe-Ti does.

Having Fi, Te types will likewise display tension rising from the corners of the lips to the nose. This small area of the face will be anything but lax, often pulled taut so that a vertical indentation is created from the muscular interaction. And when Te holds priority over Fi in the psyche, the upwards tension of Fi will be stifled midway up the nose, creating a bulge from the clash between upward tension and the abrupt stop.

Inversely, when Fi has higher priority in the psyche, then the upwards tension of Fi will break through the cheeks, rising towards the eyes. See Figure 29 for examples of this contrast. In moments of deep feeling, a strong Te type may also display this breaking effect, but for the largest part their emotional expressions will not reach the eyes.

As an additional byproduct of this muscular clashing, when Te is very strongly represented there may be a split between the cheeks stemming a few centimeters horizontally from the corners of the lips, as is visible in Figure 29.c. This subtle indentation is a further effect of the conflicting muscular pulls going vertically across the face.

This signal is not always visible in Te-Fi users, but its presence is a definitive marker of this function’s existence in the psyche. The tension that occurs in Fe-Ti users in this specific area of the face will never be pinched in this manner. Instead the skin will be creased vertically and pushed like a curtain diagonally toward the ears.

Being void of a certain pathos which creates delicacy and earthiness in articulation, Te’s voice will instead carry a nasal, pinched and often piercing intonation. Its words will be spoken with the same directness as its gesticulations and will avalanche forward with the same uncompromised ease and momentum.

Even at a very early age, a high Te child will have no trouble articulating, doing so seamlessly as the environmental causality registers mentally as quickly as it registers vocally. Additionally, this nasal voice will tend to be monotone due to the absence of a swelling, emotional emphasis. However, because of how one’s intonation is influenced by the language native to the person, this signal must be understood relative to the baseline intonation of the spoken language.

For a primary Te type, it may be difficult to properly coordinate all of the yang energy that naturally emerges from their process. This yang energy is not only distant and insensitive, but it’s also off-beat due to Fi’s influence. As with Fi, the tone, duration, and volume of their speech may be unordinary and stronger than may be expected. Often a Te type will not know where limits lie in a social setting, and thus come across much more harsh, cold and forceful than they may intend.

This is not to say that Te is any more predisposed to cruelty or ill will than Fe. But despite that, however sincere, generous, and well-intended Te may be, there will come with it an inherent difficulty in monitoring one’s brashness against other people’s sensitivities; a difficulty that is only abated with practice and many years of developing tact.

Fortunately, Te is a process that is well equipped to develop methodologies for managing environmental variables – of which people are one. Should an interest arise in the individual to coordinate themselves socially, they need only to direct their logistical thinking to cultural adaptation to produce a functional approach.

Naturally, the specific approaches used for interaction vary greatly between persons, but it has been my experience with Te types that their methodological approaches in societal affairs are quite often indirect ones. It would seem that Te-Fi prefers to operate in an emotionally self-contained form, and grease the wheels of conversation using partially disconnected, yet engaging means of interacting such as knee-jerk humor and irony.

Quick and witty responses to conversational scenarios and anecdotal stories allow Te types to capitalize on their speed of logistical thinking and produce relevant, yet unexpected conversational material. In this way, the Te type secures a form of interpersonal connection while retaining an uncompromised self.

The psychological keystrokes that play upon the humor sense in humanity are identified and exploited far more easily than other dynamics of the psyche. Humor carries none of the confusion and difficulty that surround emotional hurdles, or matters of intimate connection.

At the same time, humor invokes a positive emotional experience, requiring no pathos to play upon its strings. It is easy to see, then, why this approach would be so alluring to Te types (though this approach is by no means exclusive to Te). However, as convenient as such a method may be for establishing the beginnings of interpersonal connection, a Te type that scarcely interacts outside of this single methodology displays a characteristically underdeveloped Fi process.

In such cases, never is the compass truly examined or reflected upon to consider the impacts of one’s social interaction. Instead, all interactions are treated either as purely logistical matters or matters of recreation; avenues of comedic gain. As the Te-Fi pairing is properly balanced, more direct methods of emotional interaction will begin to emerge.

Now, despite being a dispassionate process at core, when this function combines with the rest of the psyche, as it inescapably will, it cannot operate entirely dispassionately like its counterpart Ti. Due to the proactive properties of its function, it must call upon some purpose or driving factor of humanity which acts as the catalyst for its direction. In all humans, the driving impetus to organize reality stems always from the instinctual center; from the libido and the specific way that it manifests in the person. Therefore, it would not be entirely correct to say that a Te person’s actions themselves are dispassionate.

Having said that, Te’s methodology is one that weighs the relationship between elements at play and discriminates based on logistics alone without factoring in the dynamic flow of emotions. It acts from emotion, but acts through a dispassionate methodology, to the end aim of that emotion. The aforementioned tendency toward humor is one such example. It is important to recognize this in our evaluation and analysis of people’s types.

Without factoring in this reality, one would find few people who completely qualify as dispassionate, regardless of their logical preference. As with Fe, we must detangle impetus from method. We must accurately differentiate the driving psychic forces behind an act and the manner in which the act is being executed. Only with this distinction will the differentiation between Te and Fe become entirely clear.