Si, as a perception process, is intimately connected to the eyes as well as the muscles surrounding these organs; the obicularis oculi, corrugator supercilii, frontalis, as well as a few other minor muscles. I should mention early on that the difference between the eyes of one type and another is not a matter of anatomical size, but of the shape produced around the eyes by different levels of muscular tension.

Different muscular tensions will indicate different attributes of focus and purpose for the eyes. As an example, the eyes of Se types carry a high level of muscular tension and focus, having the eyelids peeled back and exposing more of the eye. But Se requires such alertness to fulfill its purpose as a literal absorption process and keenly register as much information in the environment as necessary. For Si, which is not a data absorption process, this is not the case.

The dullness of Si’s expression arises from a contraction of the obicularis oculi immediately above the eyeball by the pretarsal region, with a complete relaxation of the obicularis oculi in the remaining areas. This gives the eyes an awake but unfocused quality. The bottom edges of the frontalis muscles contract slightly, creating a downward slant toward the outer edges of the eyes and an upward slant toward the center.

The combination of these contractions generates what may be considerd a confused expression, while in fact the Si type may experience quite the opposite; a level of certainty and clarity as they recall their worldview in a definitive way. At other times this may represent legitiamate confusion. When we consider that the Si-Ne pairing has a less cohesive worldview than Ni-Se, inherently filled with many more information gaps which its Ni-Se counterpart fills using the interconnectivity of its abstract worldview, we see how Si-Ne types are more predisposed to appear uninformed and bewildered when touching upon a topic that does not directly relate to a firsthand experience.

In contrast, the firsthand exposure of Se types channels into Ni, giving the user an approach of generalities, where all sensory experience is meshed into a web that has some inferred relevance to most situations. By default, this gives an Ni type a greater aura of confidence, independent of the actual level of knowledge they have in comparison to an Si user. 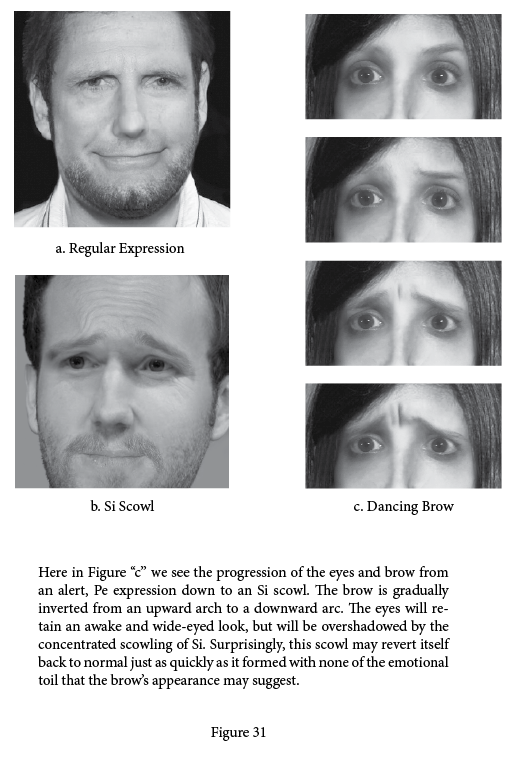 When Si is the primary function, a confused expression will be the default appearance of the eyes, regardless of whether the user is actively accessing Si. However, a different signal appears when Si is being heavily referenced. The bottom edges of the frontalis muscles contract more strongly, creating an inverted curvature for each eyebrow. The outer edges of the eyes will be more heavily concealed by the brow, and the corrugator muscles may also contribute, creating an elevated scowl between the eyes. As previously noted, the phenomenon of scowling is an automatic effect of perceptual rejection.

While we see its more obvious functionality in the rejection of sunlight, we see the same principle manifesting in humans when rejecting data of any sort. The Pi process will cause a scowl around the eyes as a resistance to the data absorption of Pe. In these moments, data is primarily being recalled from precedent, and the heavier the recall is, the stronger the scowl becomes.

Also, the transition period between the confused expression and an Si scowl causes what I refer to as an Si dancing brow. The scowl will begin at the outer edges of the eyes and wave forward until it peaks at the center, remaining elevated. You can see an example of this motion in Figure 31.c.

While the wave-like motion is not always this pronounced in all Si-Ne types, the appearance of this signal is a definitive indicator of Si-Ne’s presence in the psyche. As Si types toggle between Ne exploration and Si recall, the brow may continually dance in this way. This dancing will be especially pronounced when Si-Ne is the primary oscillation pairing.

The habitual and prominent use of the Ne-Si pairing causes another noticeable signal to arise from these types; what I call an Si ramble. During an Si ramble, perception loops in on itself. Ne is used to explore the terrain of Si’s worldview instead of the physical world, causing both perception processes to disengage from actual reality.  To visualize this, in Figure 32 we see black lines, indicative of Ne, exploring the internal tapestry of Si.

As exploration occurs, Si datasets echo back into thought, seen here by the white lines that are returning to the center. This in turn gives Ne material to make its next round of association – and so the cycle is perpertuated endlessly. Now, the operation of Si is typically static – limited to the parameters of the data it holds on any given topic – but when it combines with Ne in this way, it forms an interconnected chain between these static datasets, together building a more dynamic strand of otherwise isolated recollections. 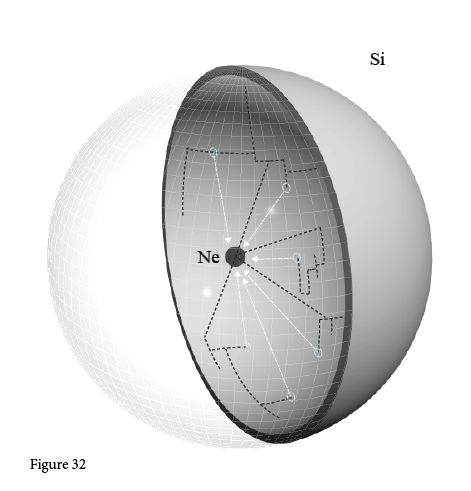 When this happens during conversation, the Si type will reach a dataset relevant to their line of thought and verbally convey it to the audience, however, as they extract this information, Ne is also actively leaping from one dataset to another using its associative property. What results is a continual topic-hopping effect; first one topic is exhausted using particular details and then another marginally related one begins with no definitive ‘point’ or cohesive direction to these interconnected topics. When Si is heavy in a type, a tendency will exist to talk from a place of precedent whenever any information in the environment eludes to previously stored concepts or experiences.

During this activity, the type may become unaware of their surroundings even though, perhaps ironically, they are heavily engaging both of their perceptive processes. The quality of Si ramblings will always be shown by a narrow focus on the static qualities of one topic, and the detailing of the data therein, cradled in subtle buoyancy as they leap into other, somewhat related topics. In this sense, their quality will differ from Ni’s rambles, which will have broader focus, less attention to the particulars, and far less, if any, topic-hopping.

As with Ni, moments of heavy Si access will be marked by the eyes drifting diagonally to the sides. Often times, as the Si type is articulating, their gaze will sway, along with their whole head and neck, off toward some otherwise irrelevant location on the floor or background.

It will remain there, fixed steadily, for the duration of their recall and then their eyes will reconnect with their audience after the information has been gathered. This results in a back-and-forth pattern where the type is constantly taking intermissions and breaking eye-contact to go into Si recall. But unlike Ni, during these drifts the eyes of Si will truly appear to be looking at the floor or the object they are facing rather than looking beyond it. Si’s drifts may even appear to be looking closer than the object their eyes are facing, as though they were staring at something invisible right in front of them. 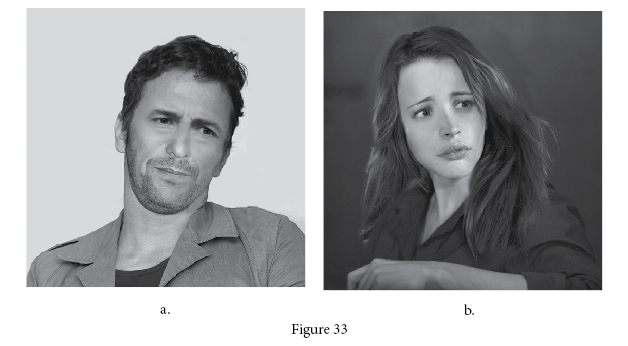 These head motions will also lead the whole body’s direction and tempo, subtly affecting their posture as a wind-rocked tree. The body-swaying of Si will be viscous and relaxed, but slightly less so than that of Ni. This is because Ne’s buoyancy will influence the energetics of Si, giving it occasional excitations of spriteliness even in the heaviest Si types.