Out of all eight cognitive functions, Ti is the most distant, being disconnected not only from the objective world but also from the subject themself. It has no passion for proactive expression, nor for emotional conviction or involvement. Because of this, Ti has a uniquely lifeless disposition. When Ti is engaged, all tension leaves the cheeks, causing them to be entirely relaxed and flat, especially in the regions between the eyes and the corners of the lips.

In Figure 21.b we see an example of a Ti face at rest. Notice also how the unsupported weight of the cheeks causes the corners of the lips to turn slightly downward. For some, this effect may cause them to appear frustrated or annoyed, when instead their internal experience will be entirely dispassionate. It is somewhat difficult to visually identify Ti, owing to its innate lack of expressivity. However, this very lack of expressivity, and how that interplays with other processes, will reveal several other signals through secondary effects.

As is true for either compass function, the act of engaging Ti calls energies away from the objective world and into a private, internal focus. But for Ti, all energies retreat into this lifeless and dispassionate center, causing far heavier momentum halting than with Fi. The face experiences a complete neutralization as all muscles suddenly relax, even if moments before the user was engaged in very charismatic expressions.

The body becomes inflexible, freezing in its current position as the eyes disengage downward. The voice will trickle into a whisper or halt altogether for the duration of this neutrality. These almost robotic pauses differ in their quality from Fi, which never entirely halts the body’s flow of energy since one’s emotional energies remain engaged. When Ti is especially heavy, the user’s whole demeanor continually dwindles into inaction, appearing almost fatigued.

In these cases, neutrality will take its residence as their default body rhythm, and any proactivity (with Pe or Je) will provide only a momentary break from this flatness, which they will return to quickly yet gently.

When Ti is a less pronounced function, and proactivity is the default, neutrality demonstrates itself only through momentary pauses. For a split second, the person will halt and neutralize their face and body while their energies remain suspended, then after the compass has been checked, the body will resume its activity at the same level of enegy that it halted at. This signal is what I refer to as the stop-start nature of the Ti-Fe oscillation.

The articulation of Fe is continually being interrupted by these moments of suspension, while the articulation of Te-Fi is far less affected by moments of compass checking. The energy of Te-Fi never ventures to such extremes. Te, despite being a dispassionate process, is still nonetheless strongly invested through an objective connection to the world, and Fi, despite being a reactive process, is still emotionally involved in how the situation impacts it personally.

For Ti-Fe, both of these invested and involved energetic qualities are given to Fe, and none to Ti. The result, as we might expect, is an abrupt shift between being strongly expressive and suddenly wholly inexpressive. 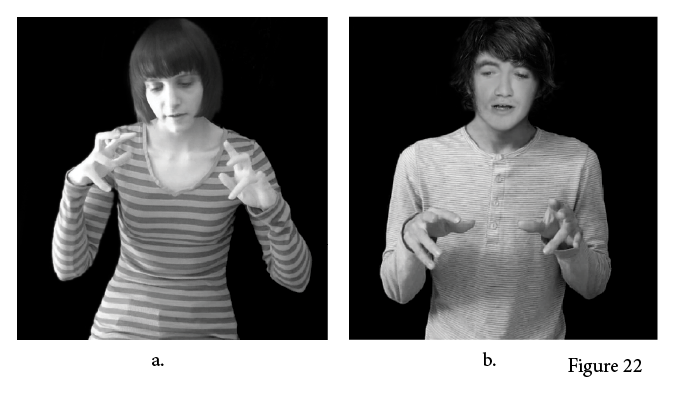 When neutralization occurs during Fe gesticulation, the hands will also freeze in specific ways. The fingers will be meticulous, stretched taut, and strangely delicate. The wrists will also bend, often slightly downward while the fingers bend slightly upwards. This creates an appearance reminiscent of a puppeteer’s hands; of the sort that pulls a puppet using individual fingers. In Figures 22.a and 22.b we see examples of this.

The opposing muscles in the forearms contract to create this isometric pull on the fingers, which is itself caused by the tension of judgment on the body. This occurs more commonly when the individual is struggling to translate the logical precision of Ti into accurate articulation through Fe.  The delicacy of the fingers is a reflection of the psyche’s struggle to precisely bring reactivity into objectivity.

As this dynamic requires participation of both Ti and Fe, it engages the entire oscillation and places the body in a heavier state of judgment. It is not such a prevalent signal in types who lean much more strongly on only one of these two functions.

A strong Ti user’s attempts to show Fe expressivity will often be lacking; coming across as false or unconvincing. One such example is a Ti type’s smile. The smile of this type will spread itself widely through the zygomaticus major muscles, but as the upper cheek muscles don’t participate in this expression, the smile will remain flat in the areas below the eyes. It may seem as though it was created by lifting the bottom of a curtain through two points of contact. The flatness of the cheeks weighs on the rest of the smile, causing a more mild, courteous and placid appearance than a full Fe smile.

Like in Fi types, there is inherent difficulty in communicating one’s internal state. But unlike Fi types, whose facial expressions often don’t synch with the intended emotional implications, a Ti type will succeed in conveying the proper or expected expression but lack vitality and energy in its execution. Ti types have a fair sense for what emotional dynamics are occurring in their environment, via Fe awareness, but they may fail socially due to a lack of participation and animation. For such types, sustaining an emotionally engaged persona for long periods of time will lead to physical and social exhaustion.

The internal experience of Ti is a deeply paradoxical one. Due to the combination of dispassion within an introverted function, the process of introspection leads the individual into a realm where absence is found at the very center of its existence.

There is a feeling of deeper separation from the self, proportional to the level of internal intimacy one achieves. It would seem, to a Ti user, that at their very soul there is fundamentally only nothingness; the Śūnyatā of Zen Buddhism. Similar to how Anglo-Saxon mythology is, in many ways, an expression and anthropomorphization of the character of Fi, we may consider Zen Buddhism to be a philosophy fundamentally generated by the process of Ti.

The whole of its spirituality is that which naturally emerges from, and most cohesively aligns with, the psychology of Ti. While I feel that several volumes could be dedicated just to this topic alone, I will briefly mention some prominent expressions of this philosophy here.

The cause of suffering is attachment.
(The Second Noble Truth)

The philosophy of Zen notes that the origin if suffering is attachment to the world and a relinquishing of all striving and grasping is the key to achieving separation from suffering. While other doctrines and philosophies may teach that the proper avenue to approach the suffering innate to existence is with vigor, preservation and righteous avoidance of sin, Zen teaches that such approaches can never properly lead to contentment and that dispassion alone can unravel suffering since it’s caused by passion; the yang assertion of agendas and needs.

Here we are immediately stricken by the exaltation of a logical disposition and approach to life. Furthermore, this dispassionate methodology is practiced through reorganization of internal content; by introspection or meditation (Zen), and not by any organization of the external world.

Kamabhu Sutta: With Kamabhu
(On the Cessation of Perception & Feeling)

Signless (void of associations and symbols), empty (void of passion and identity), and undirected (void of proactivity); these three contacts elegantly capture the three single qualities of Ti. Remembering that judgment is eternally pivoted against perception – in a constant struggle to clarify and dismantle all the information it brings – an intense immersion into introverted judgment will cause a near-complete cessation of the perception oscillation.

In such a state, judgment remains empty, undisturbed and still. From this passage we gather than Zen Buddhism calls upon the complete and pure experience of dispassionate introversion, at the removal of all other interferences. It halts not only feeling (the emotional register and ethical function) but also perception, and the person is immersed into a singleness of process.

In this and many other passages we see a disposition towards a disassembly of delusion, of schemas in all their forms, and bias towards (i.e. passion) or against (i.e. aversion) things. There is neither desire for nor in opposition towards any element of reality. The quenching of desire speaks once again of a logical process, while the dissipation of schemas/themes speaks towards a depreciation of worldview. Here again we see the abandonment of perception; of precedent and preconceptions.

Ti alone has no capacity to create; it has only the power to deconstruct. And it deconstructs logically, leaving behind only negatives – only what things are not, without having any avenue from which to measure what things or reality are. Interpreting reality through this singular function generates a vacuous, empty perspective precisely like the one above.

And likewise the quest to identify the innate self leads the person to the conclusion that there is no self to be found, nor can the existence of anything in reality be substantiated. The void, we might say, is what lies at the very end of Ti; an utter stillness that invites one into a strifeless nothingness where there is only a purity of awareness.

It is no surprise that Ti, being such an intimate and internal processes, has at times been associated with the very essence, or center of human’s existence. The compass process is readily recognized, even if unconsciously, as the seat of nobility, self-perfection and self-mastery.

But while it represents a significant and indispensable part of the equation, it alone cannot lead to actualization or self-mastery. There is as much truth to be found in identifying what reality is not, as identifying what it is. A keenly developed perception oscillation, used in tandem with a sharp discernment oscillation will lead to greater insights than what any function could achieve alone.