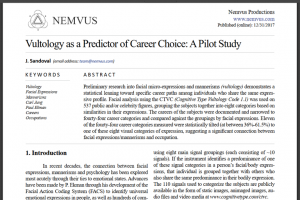 Preliminary research into facial micro-expressions and mannerisms (vultology) demonstrates a statistical leaning toward specific career paths among individuals who share the same expressive profile. Facial analysis using the CTVC (Cognitive Type Vultology Code 1.1) was used on 537 public and/or celebrity figures, grouping the subjects together into eight categories based on similarities in their expressions. The careers of the subjects were documented and narrowed to fourty-four career categories and compared against the groupings by facial expressions. Eleven of the fourty-four career categories measured were statistically tilted (at between 36%-61.5%) to one of these eight visual categories of expression, suggesting a significant connection between facial expressions/mannerisms and occupation.

Vultology as a  Predictor of Career Choice: A Pilot Study