Ni, as a perception process, is intimately connected to  the eyes and the muscular tension that surrounds them. However, being a recollection process and not a data absorption process, the ocular tension it exhibits does not relate directly to any active engagement with the landscapes or objects in its line of sight.

Instead, the quality and focus of Ni’s eyes directly relates to the quality of the recollections that are happening during a specific moment. The eyes of Ni will neither engage nor track the environment, remaining open yet wholly unattentive to its movement.

In this lack of attentiveness, Ni runs parallel to Si, however the specific appearance of Ni in the eyes is a direct inversion from that of Si. For the eyes of Ni, the pretarsal region of the obicularis oculi is relaxed while the preseptal and orbital regions are pulled taut, as see in Figure 34.

This causes the top eyelid to rest more comfortably over the eye and the eyebrow to arch upward slightly. This arching effect will often be heavier toward the outer edges, giving Ni types a far more forward and intense stare. The lowered eyelid, hovering above a steady stare, will then give Ni’s eyes a distinctly unimpressed appearance. In a general sense, the default expression of the eyes can best be described as bored or uninterested. In some situations, Ni’s gaze may even seem annoyed or irritable, independent of the user’s actual emotional experience.

At times when Ni is pronounced, the eyes will produce a trance-like effect, due to the manner in which their stare can be sustained for far longer stretches of time than Si. The stare of Ni is not broken as often as Si’s since Se fixates on subjects for longer periods than Ne.

Si-Ne as a whole is less visually steady, even though Si by itself would remain wholly steady if it could. The Ni-Se oscillation, and especially Ni, can carry an almost permanent stare. The combination of this uncompromising gaze with the relaxation on the upper eyelid creates a distinctly zoned-out effect. The eyes of Ni can remain fixed in this zoned-out state even while they talk, in which case the audience may feel as though they are looking through them, and not at them.

It may appear as though the Ni type monologues to some divorced aspect of reality, and the conversationalist has become a mere spectator. Indeed, this may be precisely the case, if the Ni type has drifted away into the waves of their own worldview; flowing through the interrelations they have formed in a manner comparable to Si’s rambles. 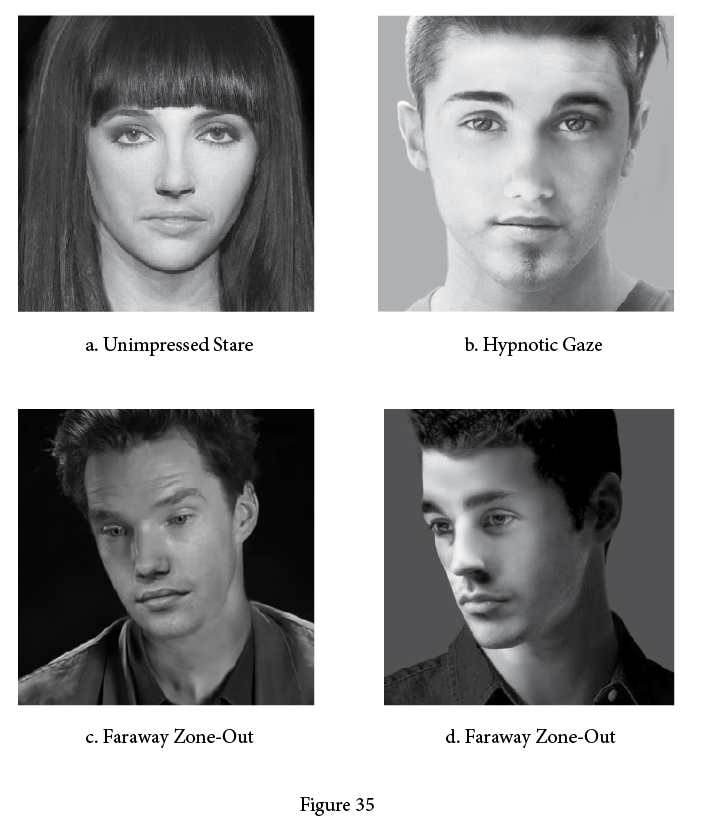 As with Si-Ne, Ni can enter into a perception loop in which Se navigates the terrain of Ni, rather than the outer world, creating a complete disconnect from the environment. When a type heavy in Ni speaks from this place, their words will be very linear in their direction, and yet will often avoid drawing definitive conclusions.

While Ni follows one impression or rather narrow line of thought, sometimes beyond its natural scope,  it will differ from a judgment process. Ni will not be the psychic process axiomatically opposed to alternate ideas or interpretations; it will simply not see them by itself. If told “well it could play out this way too” they may nonchalantly shrug, while their head tilts to the side and they leap back on their linear track through some other entry.

There will exist a tendency to run away with one’s own cascading sense of inevitability. Even if they may be unsure of what the definitive outcome may be, a casual reluctance will still exist to notions too divorced from their impressions, even if such notions may seem to them as being more logically or ethically founded.

I must also take a moment and differentiate this process from the influence of fear in the psyche. The natural reluctance Ni has toward certain trails of thought, or its heavy gravitation toward a small cluster of interpretations is not the result of denials or paranoias. All persons can become resistant to certain interpretations of data and fixate or narrow their scope of possible outcomes based on a desire not to believe in directions contrary to their sense of safety.

For Ni, such motivations are entirely unrelated to the manner in which it processes perceptions. It would be more correct to say that Ni is often unaware of alternatives, than to say that it filters out incongruent information to sustain a singular path. For the same reasons, Ni is a different phemonenon than the adherence to a philosophical or religious schema, which can take one’s life experience and interpret it all from one unified framework.

For Ni, there is no cohesion in its framework save for what is incidentally, and sometimes even irrationally, sensed about things. An Ni type may be entirely passive and undecided about many aspects of reality, having no definitive position or stance, but only abstract impressions as persistent to them as the information received from their eyes. These impressions are formed independent from how they may come to judge such a sense.

Another quality of Ni’s ramblings is its cryptic conceptualization. When Ni speaks and transitions fom one abstraction to another, it does so from a web of associations created uniquely by them and which may make little sense to others.  The Ni user alone holds the decryption key to this web of connections, which contains many hundreds of strands built atop one another and which will influence their response to even the simplest comment.

Their audience may become confused by seemingly ambiguous, acausal or unclarified statements.  This is not something so prevalent within Si types because for Si, the ‘key’ to a conveyed experience is in the experience itself. Considering datasets are static and interconnections are short-hops; associations are less expansive, which makes them easier to trace individually, even if there are plenty more of them. The way that Ni leaps through so many wide-ranging ideas is not at all visible to others, thus the ramblings of Ni are more bewildering in a general sense.

Even when the root experiences that lead to their impressions are properly conveyed, the audience may not feel they are enough to warrant the conclusions drawn. Unless the judgment processes become keenly involved in quantifying these abstract impressions, Ni’s worldview experience will remain, for the most part, hidden from their audience. 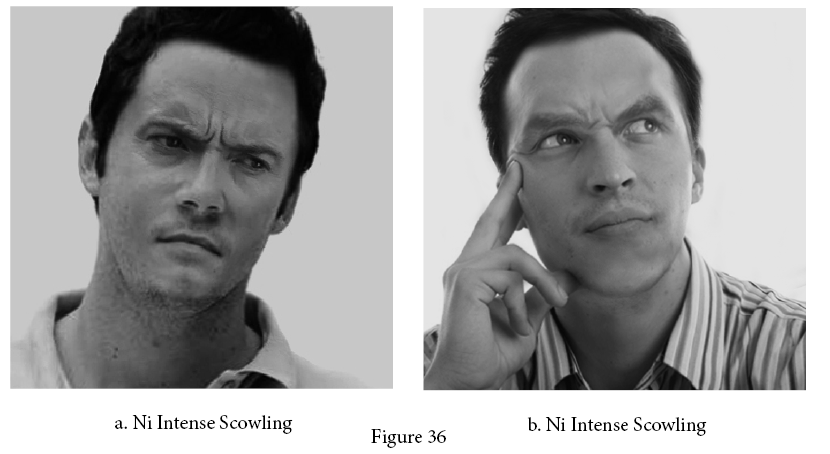 When Ni is being heavily accessed for the purpose of recalling a specific association, the eyes will mirror the process of tactile searching by furrowing the brow into a scowl while the eyes search inward into memory. During this activity, the outer edges of Ni’s brow will rise up even further and the corrugator muscles will contract in the center of the brow.

The preexisting sharpness of Ni’s eyes, caused by the tension of the orbital region of the obicularis oris, will be amplified by this additional contraction, generating a far more striking, and perhaps intimidating, complexion than Si’s scowl. Ni’s scowl will also be elevated above the eyes, while Si’s scowl will more commonly compress the eyes, weighing heavily over them and obstructing them to a degree.

Ni’s intense scowling will occur in small bursts of strong concentration, while a far more typical and casual use of this function can be observed through its drifting. When drifting, the viscous body of an Ni type will sway and lean loosely in the direction of their gaze. During dialogue, the gaze will transition from the audience to some unrelated point in the environment, then back, allowing the mind to glide through the vast expanse of its inner world and find whatever information may be necessary in that moment.

Unlike Si, which has a near focus, the eyes of Ni will carry a faraway focus during these drifts as seen in Figure 35.d. The eyes of Ni will appear to see beyond the subject, as though they were attempting to see past the earth’s horizon.


This snippet has been imported from the 2016 Cognitive Type book, with the author’s permission. We hope you enjoy!