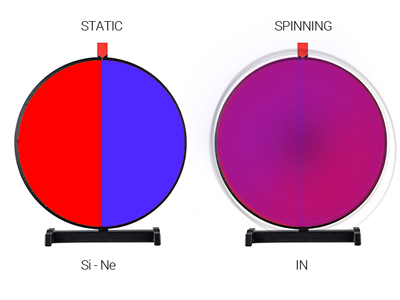 The compound functions are emergent effects born from the unified activity of an entire oscillation pair, which produces an attribute conjunction that does not exist in the two poles separately. Compound functions arise as an inevitable result of our cognitive architecture operating computationally at the millisecond scale. The oscillation of a function axis from one pole to the other happens many times per second as our cognitive architecture works to give us an unbroken real-time awareness of our world. As a result of this, the two poles create a third byproduct in the same way that a color wheel with two colors would create a third color blended from the two, when spun up rapidly. For example, the activity of Si + Ne will combine to produce an attribute conjunction of I (from Si) and N (from Ne), into an I+N attribute conjunction. This attribute conjunction is called a compound function, rather than a native function, as it is an emergent effect rather than a core reality of the person’s psychology.

These compound functions should not be confused for native functions. Compound functions like IN will lack the computational features of Ni proper. Therefore it’s important to note that IN ≠ Ni, even though both will have the same general attributes. Ni is a metabolic process possessing the exclusive properties of V, such as: convergentism, idiocentricity, fatalism and tunneling. These properties are not inherited when the Si-Ne oscillation cycles rapidly to produce an IN attribute conjunction, because Si-Ne (M) lacks the essential computational nature necessary to produce those effects.

The same logic holds in reverse. The effect produced by the joint activity of Si-Ne is not something that could ever be reproduced by Ni-Se, but is instead a new emergence generated solely by the holistic unity of Si-Ne. Therefore, IN is a compound function exclusively belonging to Si+Ne users. It would not be correct to view IN as an artificial Ni, but instead as a new entity that is different from Ni in special ways. The same is true for the other seven compound functions, which are each the exclusive emergence of a given function pair, as summarized below:

The symbol “^” is used between these conjunctions to mean “raised to.” For example Fi^Te can be read as “Fi raised to Te” where Fi (as Ji) is being applied to the operation of Te. Computationally, this would manifest as the processing cycles of D- being leveraged towards D+‘s aims & ends. When the functions are reversed, such as in Te^Fi, then it is Te (as Je) that is being put to use for Fi’s aims & ends. Both poles in an oscillation can be put toward the other’s aims & ends, which gives rise to these two conjunctions that manifest from each oscillation.

Identification of which function axes you have can be done by examining oneself against the two J or P blocks as wholes. For example, to differentiate whether you have Fi-Te or Ti-Fe, when you sense some blending of the two attributes in yourself, you can examine how the blending occurs in each block. The blocks each blend the functions together in distinct ways, and this can be compared to how it’s happening in you.