Articulator as the Lead Process

The articulator process, being the proactive expression of judgment, demonstrates itself through accentuated motions of the head and body from a place of rigidity. The body will jitter as an autonomic response to the verbal delivery of a judgment, however slight this jittering may be. Head shaking, head nodding, raising eyebrows, chopping hand motions and head pushes forward are the most notable expressions of this activity. 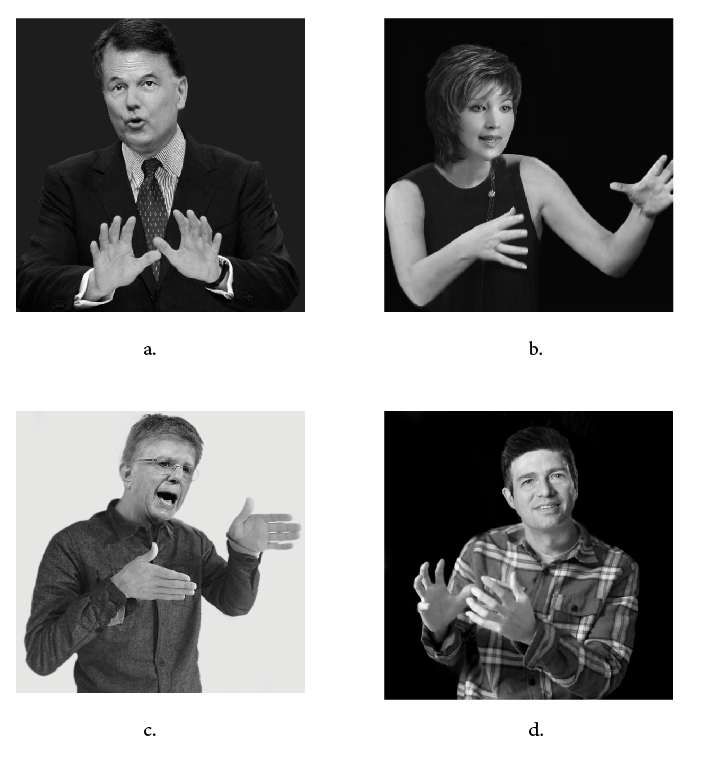 Regardless of whether the individual has had any formal training in gesticulation, at the time of this process’ manifestation there will existing a strong tendency to move the appendages – in whatever way possible – to the rhythm of their face and mind when conveying a conviction. Often times the forms the arms, hands and fingers take, in the struggle to exhale these convictions, are forms the person has never before utilized – yet the impulse to gesture them prevails.

The hands will twist and bend in awkward ways, as if struggling to give tangible form to their ideas. Facial emphasis, such as accentuating with eyebrows or widening the mouth when speaking, equally stem from this impulse to manifest that conviction.

It is important for me to emphasize that this tendency, or perhaps it is better described as an urge, to accentuate speech is not contrived by culture, although its specific execution is indeed susceptible to cultural influence. That is to say, the urge is innate, while its specific manifestation holds a level of variation among societies. It is, by default, more difficult to refrain oneself from utilizing some form of projection when articulating a conviction than to allow one’s body to find its own avenue of expressivity. Both extraverted processes, Pe and Je, are marked by a proactivity in the body; motion. However, Je delivers motion from an origin of rigidity, while Pe delivers motion from an origin of fluidity.

For a Pe type, their own motions will give momentum to their fluid body; the motion of the catapult will drag the whole body with it, swaying it in that direction with energy. For a Je type, their body will jitter as a result of the cargo’s momentum being abruptly stopped by the rigidity of the body. As tension is still sustained throughout the body for a judgment type, Je’s exacting motions act only as a temporary release of that tension for the sake of projection, before the body returns again to its default composure.

The motions of Je can take a large variety of forms and this is because, unlike all other processes, Je has a level of deliberation that is inherent to its nature. It is the intentional (judgment) delivery of motion (proactivity), for the sake of managing external causalities. Now, this does not make its signals false because they are consciously controlled to some degree; it is an entirely expected part of its functioning as both a deliberate and proactive process.

The articulator process exhales itself through the mannerisms of the person, utilizing whatever forms they know how to use to convey meaning in gestures. And if no forms are known then they will still generate movements with no particular premeditated coordination. Gesticulation, as a whole, can be called the practice, refinement and systemization of the articulator process. It is the means by which humans convey conviction and meaning to one another. This is also why I call it the articulator process. While Je can be used without communicating with another human (for example by simply deciding to move some physical objects into a different organization) its signals show themselves when conveying meaning to another person. The physical, mechanical movement of objects is not itself evidence of Je operating, but the decision to do so does call forth the Je process.

Often what people imagine when they argue the legitimacy of a correlation between facial/body expressions and cognition is that because expressions can be controlled, there is no validity in what they convey. Such an argument is only considering the deliberating process of Je, which is but a sliver of the whole expression of a person, and ignoring all else that transpires in the body. Not all expressions are under conscious control, and even those which are still reveal striking qualities about the psyche of the individual in question.

Along the same lines, a common misconception is to believe that if there was a correlation between the psyche and expressions, it would appear as an unambiguous one-to-one connection between a static signal and a single mental experience. That is to say, if we were to photograph a single posture, disconnected from all context, then we ought to expect that the person making that posture would be having a certain psychic experience at that moment.

But naturally, we won’t always be psychologically experiencing the Je process simply by arranging our limbs in a posture resembling a Je signal. An expectation for such a binary correlation would automatically make it impossible to identify whether or not there may also be a different reason for making those muscular contractions in different occasions. It would wholly close off investigation into the nuanced ways that humans carry themselves and what may be motivating them to act as they do at different times.

If indeed gesticulations were a result of Je’s cognitive processing, then it would need to be true that muscles can be used for locomotion as well as for expression, and the layered existence of both doesn’t automatically make one or the other invalid through some imagined mutual exclusivity. Muscles can be used both to mechanically posture oneself in certain forms, as well as convey the activity of Je and other processes.