In Princess Mononoke, Lady Eboshi is more than just your typical leader. She’s got a very peculiar philosophy which carries all the qualities of Te-Fi. She’s an independent woman, militant, but also very ethically selective. For example, she goes around towns and specifically buys brothel girls/servants to set them free as her own workers. Women are regarded with a little bit more privilege than men in her town, and she adds to this opinion. She is ruthless and heartless and isn’t afraid to kill anyone in her way, yet she lives in a secret mansion where she houses lepers (the “outcasts of society” which other villages would throw out). She takes pity on them and cares for them — although, again in very Te fashion, these leppers themselves have to earn their keep by making guns for her.

We can understand this affinity for both lepers and brothel girls to be thematically related. Both are very lowly (and unfairly) regarded by the average citizen. Instead, she champions for them, while not giving much concern for other people. She has a very selective Fi palate, and whoever isn’t on her side of the palate can get shot. She’s an angel to some, and a devil to others.

She never smiles or laughs in the whole film except for in one scene (which shows a very Fi laugh, a mixture of unseelie Fi contempt and Fi uncontrolled laughter). For those who’ve seen it, the scene is:

She laughs after Ashitaka says he’s come to “see with eyes unclouded by hate”. Eboshi’s laughter is in a way a reaction to the absurdity of Ashitaka’s idealism, and yet this grants him access to Eboshi’s sanctum. By this we know Eboshi, although scoffing at Ashitaka’s naivete, trusted his character enough to be given full revelation — he crossed the Fi palate. Eboshi have very strong use of Fi, which she channels through Te. 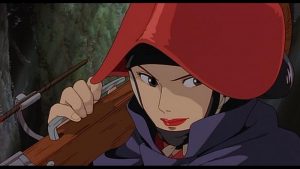 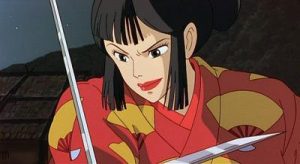