The foundation of the Cognitive Typology Architecture (CTA) is based on a hypothesis that human body mannerisms consistently self-organize into canonical clusters, independent of ethnicity or other demographic variables, and that these clusters correlate to cognitive states, under a theory of embodied cognition.

The hypothesis states that, when large amounts of people are visually evaluated in conversational settings across time, their conversational expressions are asymmetrically weighted towards one of four groupings. These four groups can be modeled using two descriptive dichotomies:

The hypothesis states that when the collective human expressive profile is modeled across these two axes, the distribution of people across these axes is not a bell curve, but a pair of bimodial curves. This affirms the existence of a natural phenomenon. These asymmetries are naturally occurring in all races and cultures, and can be identified/verified by experimental repetition.

The two aspects of this hypothesis require independent addressing. The following information provides preliminary support for both tenants of the hypothesis.

This asymmetrical distribution can be seen from our data, available here. When organized according to energetics, we see this result: 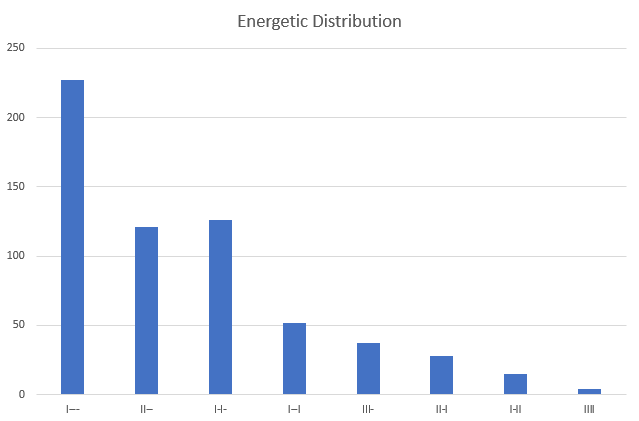 As you can see, the tallest bar is that of l—, and the smallest bar is that of llll. This demonstrates that a balance in the four visual clusters is uncommon, and the most common result is for people to be asymmetrically tilted across these two axes (Rigidity-Fluidity & Proactivity-Reactivity). This represents the first point of the hypothesis.

The second point of the hypothesis is that these asymmetrical signal clusterings correspond to differences in psychology. Supporting evidence of this is currently being collected based on a comparison of people’s most prominent visual clustering against an independently administered psychological survey. See here for more information. Preliminary data so far shows a positive, non-random correlation between a person’s most persistent visual-grouping and their psychological results.

The data collection thus far has been imperfect, and suffers from methodological shortcomings. The data has not been collected and processed through all the appropriate scientific practices, nor has there been any formal publications yet supporting this hypothesis. However, preparations are being made to formally test this hypothesis. If you are a research group or academic body, and would like to collaborate with the site authors on experimentation, please contact us at this page.

For more information on pilot studies that have been conducted thus far, visit this page.