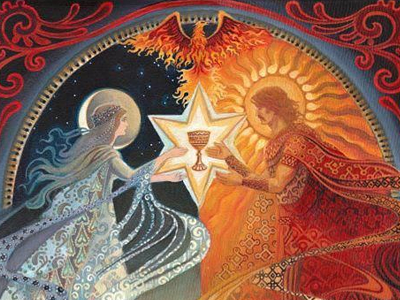 Of the many dualities that exist within us, none is more obvious than the male and female division, which has a very real and even anatomical manifestation. As such the male & female division is the most ancient, hard-wired, and universal to our species. Historically and mythologically, the phenomenon of enantiodromia is depicted by the male and female sexes; their tension and copulation. This is because the way the primordial human soul developed was by imprinting things into this ready-made template for understanding our fundamental duality, borrowed from millenia of evolution. Not forgetting that evolution is a conservative enterprise and reuses existing circuits, as we evolved our awareness to understand more sophisticated concepts — such as time (night/day), seasons (summer/winter), mortality (life/death) — we naturally understood these dualities, as we understood our most essential duality, via a male and female division.

From the division of words into masculine and feminine forms, to the genders of our Gods, to the way we anthropomorphize our oceans, the sun, the moon — all have an either masculine or feminine energy. And the most essential elements of our consciousness have a symbolic male/female duality within them; a yang and yin dichotomy. While the processes described by Cognitive Type theory exist primary as information metabolism pathways, each aspect corresponds more or less strongly with a masculine or feminine orientation.

Introversion carries a feminine energy due to its reactive nature and more self-retracting presence. If the male is the day, the women is the night; concealed and veiled from the rays of the sun. While the masculine archetype is more readily known, visible and open, the feminine archetype is elusive and avoidant. Such is the nature of introversion which hides from plain sight; immersed in a private world of their own making. The feminine is that which is chased, and that which waits and responds instead of initiating. Moreover introversion, like the feminine, is that which gives birth to new mysteries out from some unknown place. It gives life to ideas that are nurtured in the womb of the soul.

Judgment carries a masculine energy due to its deliberation and dependency or rationality. Archetypally, the feminine aspect is ephemeral and amorphous, while the masculine is delineated and firm. Judgment is calculating, analytical, and demanding. It stands behind ideas with conviction and resolution. Judgment is the principle of Logos; of Order and structure. The Animus (the male principle) is one of Order and draws boundaries between ideas to conserve the parameters of its literal or conceptual territory. Like the male principle, Judgment protects us from the chaos of the outer world by quantifying, delineating and separating out things from other things.

In contrast, the feminine is more receptive to the pregnant chaos; the unknown and its more holistic properties which are not easily delineated. If the male is the king, then the woman is the oracle. She does not always know her reasons, but trusts in the implicit, incarnate, evolving. Perception is artistic, sensational, associative. While judgment constructs the world of politics and the clash of power/ideologies, perception – like the feminine – nurtures an understanding of life more organically and impressionistically. She is more connected to ‘flow’ than she is to ‘structure’.

Thinking is essentially rationality applied in the inanimate sense; measuring the substances in reality without considering them as incarnate, but as only (mental) objects and variables. As we know of male psychology, it is more “gadget” oriented and mechanically minded. Man as the toolmaker is the motif exemplified here. The dispassionate, heady temperament is archetypally associated to the masculine, with the Animus being stoic, unflappable and steely.

Feeling is essentially rationality applied to the realm of animate beings and their living considerations. It is all the reasoning and actions that emerge from tending to life and emotional wellbeing. While the masculine is more affiliated with the mechanical, treating things as objects, the feminine is more affiliated with the sensitive, nurturing, and living. The feminine archetype is inclined to view things anthropomorphically – noticing the soul in other people as well as in otherwise inanimate things. Like Aphrodite, the feminine is the goddess of love and procreation; the maternal and that which is intimately connected to the emotional register. Here the feeling dimension corresponds to the feminine as life-bearer, and life-sustainer.

The sensory dimension represents the tangible, concrete, quantifiable and practical. As with sunlight and extroversion, here again the male principle is the one that is visible and forthright. It is tied to the concrete and the immediately applicable. The masculine principle deals literally with the world, while the feminine archetype is more connected to the collective unconscious and things are considered more for their implicit/hidden qualities rather than their explicit/apparent ones.

The intuitive dimension is the side of perception that is guided by impression, association and hunches. Biologically, the female body is wired to more sensitively pick up on subtleties in the environment; a hypersensitivty that stems from a deeper connection to the emotional register (F) and negative emotion (higher scores on neuroticism) for the evolutionary purpose of child-rearing. But this sensitivity also births a stronger connection to the unconscious; to the meanings and implications behind things. Here we see echoes of  what’s been called “women’s intuition”. The feminine principle is one that is veiled; it is the ocean and the primordial waters of Genesis. She is the raw material from which the masculine principle’s Order creates structure and form. 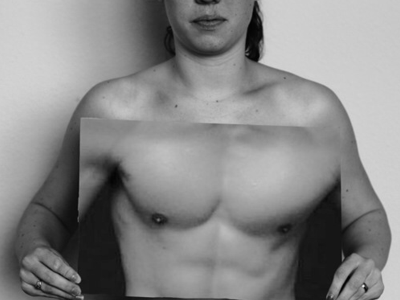 When there is a significant spiritual mismatch between a person’s biological sex and their type or subtype, a feeling of gender dysphoria may be felt. An FiNe male may feel that he was born as the wrong sex, if he is strongly identified with his Fi function and its maternal characteristics. This is of course not the case, but a result of a conflation of cognitive energy with sexual energy. Similarly a female TeSi-Te may feel she is “more of a man” than many men and indeed can take the role of a dyke, or come to resent men for treating her with delicacy. She may not see any reason why she should not also have the same authority and ease as men do because indeed she feels out of place in her gender.

It’s been my observation that a brand of feminism has also developed consisting of the gender dysphoric TeSi and TeNi female. It is understandably frustrating for a Te-lead woman to face a world where the stereotype of her sex is so opposite to her personality. However, while she is indeed female, the feminine energy in her is minimal, and it is the masculine energy in her that is strongest. It would be incorrect for her to attribute her own masculine qualities to her gender, or to present them as a case for why women at large can or do possess these qualities in equal proportion to men. This would be a fallacious projection of her own temperament/situation onto the rest of her female counterparts – who may possess a temperament quite different from her own. It remains the case that the aforementioned feminine qualities do emerge organically (and not as a byproduct of culture) far more commonly in females than males, even though there is a fair degree overlap of traits among the sexes.