Throwing some fish in these stormy waters:

I think that the greatest example of the Hero’s Journey is found in the best selling book: The Bible. Jesus Christ’s life-story itself (he’s Fe dom is he not?) follows that cycle to the T. 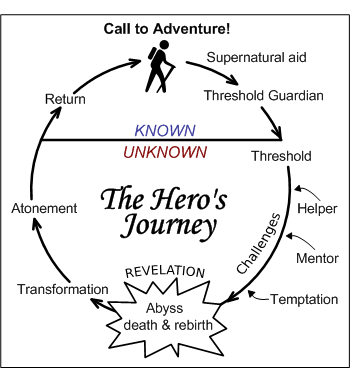 In short; I am a supporter of the idea that the Hero’s Journey is a universal pattern, and I disagree that it is a product of modern times.

Also (edit!), the popularity of the Hero’s Journey ‘coincides’ with the popularity of monotheism. Before that the Hero’s Journey was still incredibly important and spread throughout cultures world-wide, but it didn’t receive this massive focus as the other parts of the larger story (such as the tales of the Trickster) were of equal importance. The hierarchy has shifted. Bring back the GodS!!! I’m late for school now, thanks CT!