To give you a few examples of the psychological angle, we see that all l— developments still exhibit the psychological qualities of the auxiliary. A TiNe l— is still tinted by Ne, even when the function is not conscious. There is still curiosity, exploration, experimentation, open-endedess.. provided by Pe as an auxiliary.

Likewise, TeSi l— types like Ted Cruz display a “mapping” of reality, of facts and variables, in such a way as to be actionable towards Te. This unconscious-yet-auxiliary Si is still present psychologically and is tethered to Je.

And to given an extreme case of modulation, we see FeNi l-ll Jordan Peterson who has his lower two functions conscious yet Ni unconscious. And yet his Ni still plays the expected role that it should as an auxiliary and conductor pair to Fe. It constructs a wide panoramic sight, but does so for the actionable purpose of the Conductor agenda. In contrast, the Pi of a reviser type (like myself TiNe ll-l) is there to help store my Pe explorations into a synthesized comprehension of life (Pi) but not for any pragmatic aim.

We see this also with our members Hrafn and Meta (l-ll) who have an easy time going into Je, despite it not being conscious. Meta has described his Te as something he ‘can do’ with little problem, even if its not his favorite thing. So it is easier for an SiTe l— to “reach for” Te, than it is for an FiNe to “reach for” Te. And this would not be true if hierarchy wasn’t real.

So what does this mean?

It means the roles of primary, auxiliary, tertiary and polar exist independent of levels of consciousness. Which is how the system is already set up now: 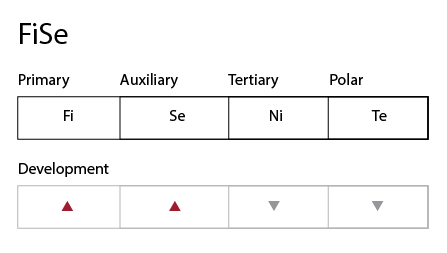 But to give an example of this:

We see here how the positions that the functions have in a hierarchy changes their psychological roles. The role of Pi in a conductor is always somewhat actionable, because of its collaboration with Je. The role of Pi in a reviser is to give a wider and more expansive view of the world, but as part of the exploratory process. The two are different. And the same goes for the other 3 energetic functions.

“But I can’t have auxiliary Se, I’m all about that Ni”

Now I think this framing solves problems like the above statement. If Se is understood first and foremost as “Pe” (as CT prioritizes Pe/Pi/Je/Pi and then subdivides into functions later), then the presence of Pe as an auxiliary is more important, metabolically speaking, than whether or not all of the function’s traits have come into full light (i.e. fully conscious).

So an FiSe l-l- doesn’t actually skip over Se in favor of Ni. In other words they’re not FiNi/SeTe, they’re FiSe l-l-. As a reviser type, the FiSe l-l- will still be open-ended, curious, exploratory, having generative abilities (aux Pe) …even if they lack ‘engagement with the tactile’ due to a non-conscious Se. And their Ni will be thematic, panoramic and symbolically voluminous/comprehensive. However, Ni will not be constructed in such a way as to aide a purposeful application or conductor forwardness.

In the old site, the type FiSe-Ni was also nicknamed “FiNi” in the 64 subtypes system and it was unclear if FiNi was a standalone type or not. This confusion has been essentially removed with the update to development levels. The 64 subtypes system was an awkward and unsustainable intermediate phase of CT, as it grouped development levels 1-4 with ego fixations.. and didn’t acknowledge 3-4 function consciousness.

The development levels are now formatted in a way that implicitly integrates the Xi-Xe-Xi-Xe hierarchy, which is what makes codes like “ll–” and “l–l” meaningful to read. Still, much more needs to be explored as to what “primary”, “auxiliary”, “tertiary”, and “polar” mean for each of the energetic quadrants. “Polar Ni” is not the same as “Auxiliary Ni”, and so forth. And I hope we can explore what these differences are on this forum~