While on the topic, I want to bring up one of the more intangible results/outcomes of this idea.

(I may break this off into its own thread later!)

As stated above, the hallmark of human intelligence is the capacity for indefinite abstraction. But I believe our abstract systems ‘grow out’ of a physically-contingent origin, through isomorphism. It is easiest to see this happen when you imagine a visual environment, like doing a memory recall of a previous house you lived in.

However, it is much more challenging to do this with non-graphical/visual information. For example with purely semantic information. It’s rather unintuitive but I’ll try to explain and hopefully it makes sense. This is a data visualization of a word association web: 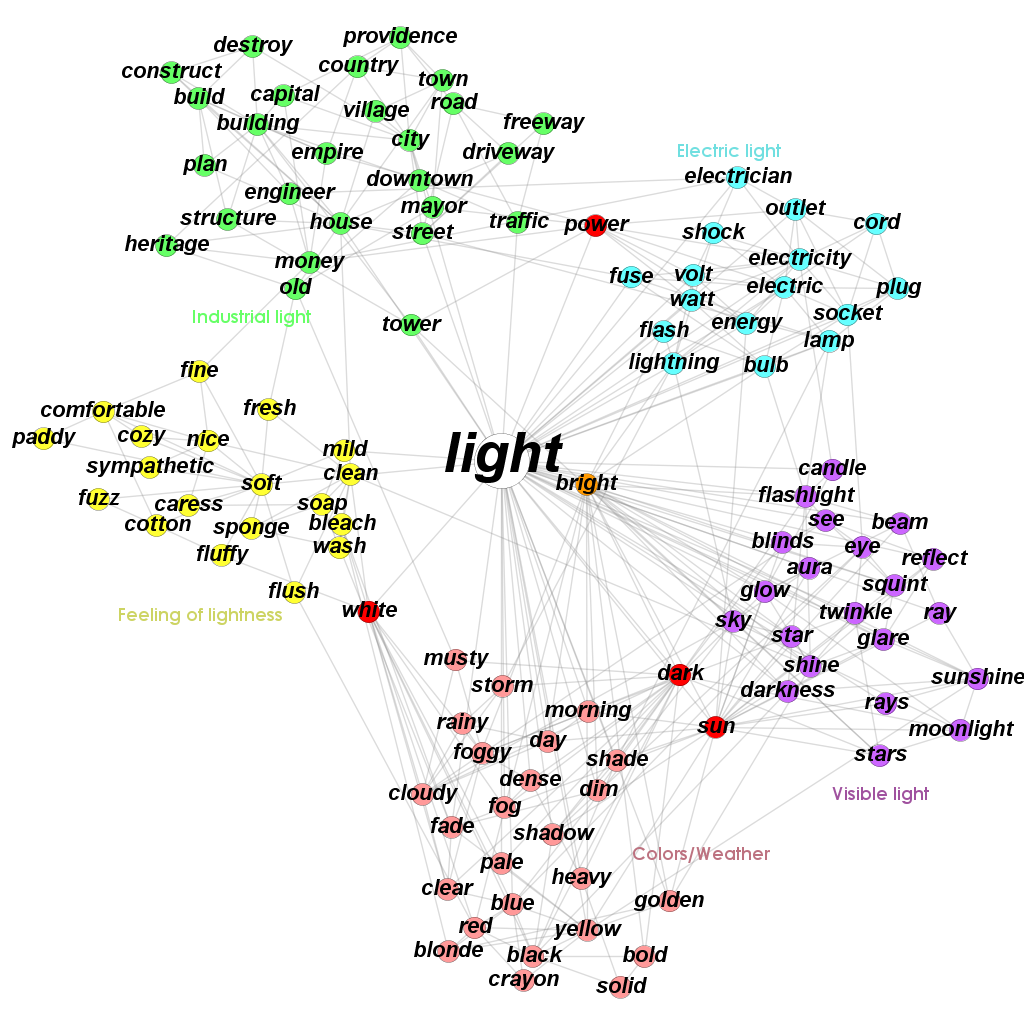 I believe our semantic labels (“words”) are arranged in dimensional planes as well, but they are non-visual dimensional planes. I think the P system is, deep down, not just graphic in nature (i.e. the eye isn’t the only organ here) but moreso a general structure for information storage and navigation. So in a way it’s like a hard-drive, and the information on it can be visual, or auditory, or anything else.

Given that, imagine “trying to find a word” in your head. Lets say you want to remember a synonym for a word… but it’s “on the tip of your tongue”, and you remember that it’s a little bit like cloudy and foggy, but there’s another words there that you wanna use (spoiler, it’s “musty” but you don’t know that yet). This diagram shows what that situation may look like if we were to imagine this predicament in a graphical way, even though it’s non-graphic in nature: 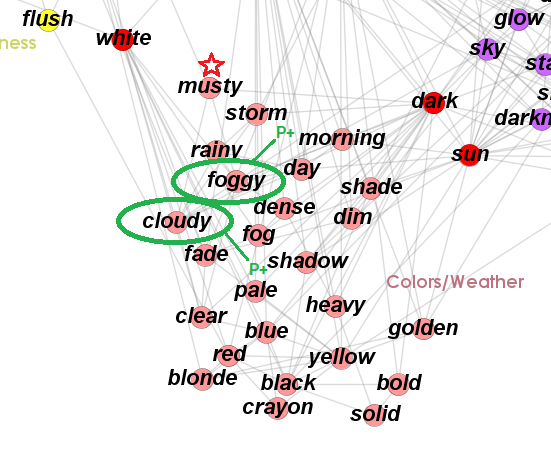 Your P+ is somewhere around foggy and cloudy, and is navigating outward to adjacent information. Strangely, you “sense” that the word is there — but this is a very strange sensation, isn’t it? When we “know” there is a word adjacent to cloudy or foggy, we’re not talking about spatial adjacency are we? We’re talking about conceptual adjacency. But nonetheless you might do this for a while, as you try to find that synonym:

And then after a few seconds, as your navigational plane is explored fully, it encounters the answer, and you find it: 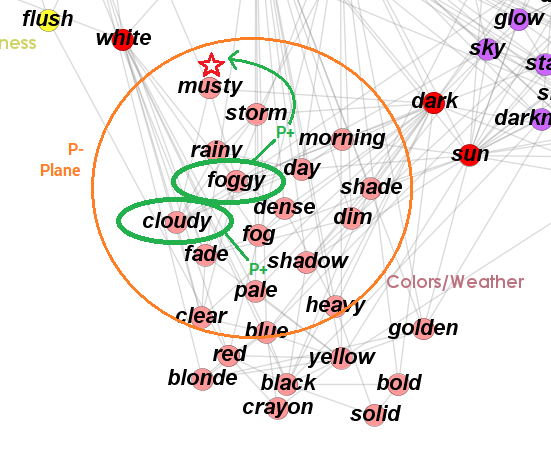 “Ah! it’s musty!” you say out loud. You don’t know how it is that the word came to you, and you weren’t visualizing anything when you were pausing to think. YET… it was necessary for you to take this hiatus from the world to process and to find the word you’re looking for. And more incredibly, you had a general intuition that if you kept doing this, you’d actually find it. It’s not immediately obvious that this is a sane thing to do. This is all very strange if you’re not thinking about how information may be encoded. But I believe it makes sense in light of this thread’s idea.

Each of us has a semantic “plane” like this, alongside all sorts of other planes. Carl Jung’s exercise of word association essentially amounts to an intentional investigation of this semantic plane, and what it looks like in a subject, what is connected to what, etc. And he used this to get some insights into what the shape of a patient’s pains and complexes might be.