What’s the plan for the dev lev profiles? Are they being retired as part of Model 1? Poor Je’s never got one…

The dev level profiles need to be finished. I plan to bring Model 1 up to 100%. So the Je I— dev level will be written, as well as the rest.

Also could you talk about the Model 2 type “names” (i.e. PR-Ms-Gr) and how you will be using them and/or how the community should be using them going forward?

Sure. Well like I said, there’s no immediate need for the community to use these terms until they actually start meaning something. This will happen naturally once readings re-open. Reports will look differently, and I haven’t yet finalizes the design, but here’s something I mocked up very quickly, showing the concept: 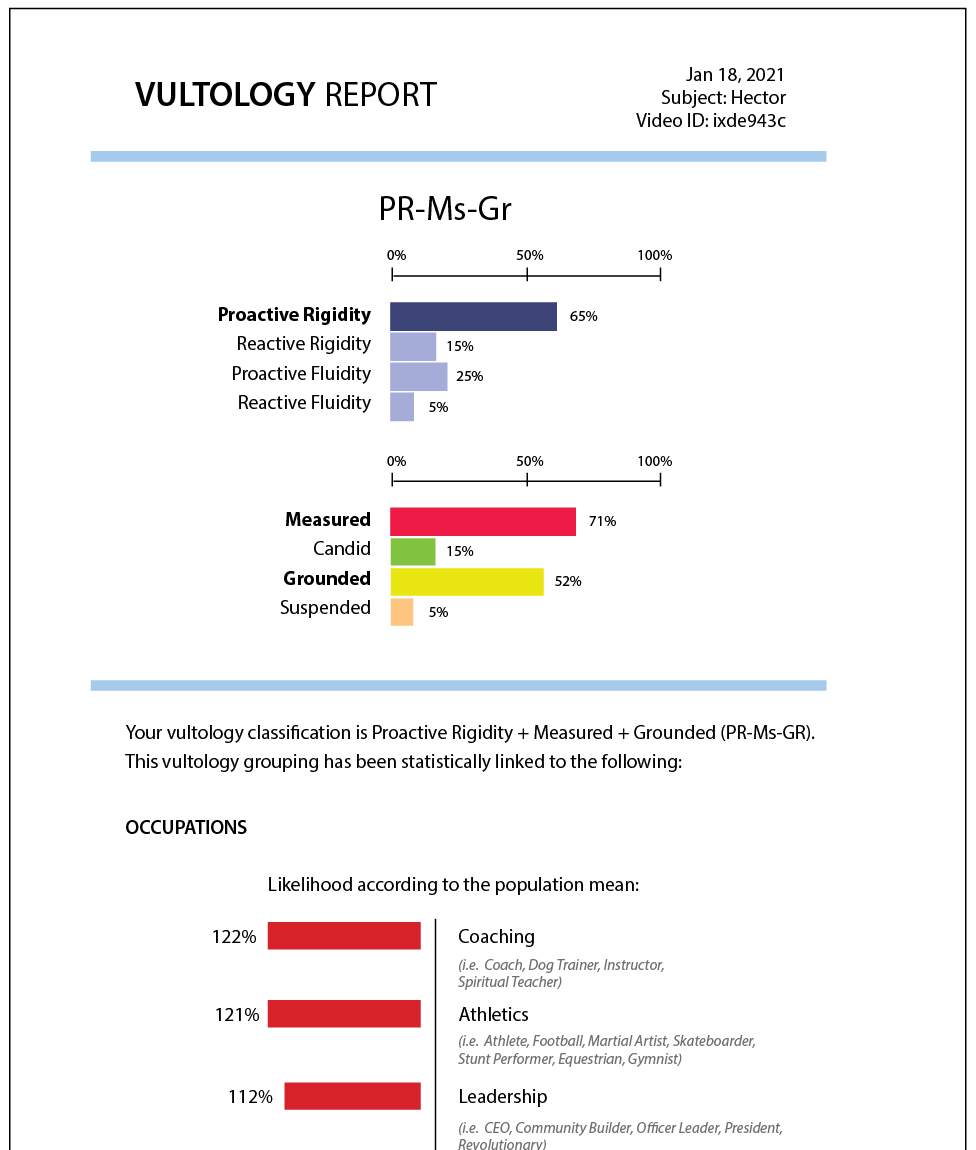 ^ As you can see, a person will be measured against these 8 visual categories and will be given percentages for their degree of visibility in each category. Then, a classification will be given according to which bars crossed over a threshold. In this report above, we see Proactive Rigidity, Measured and Grounded all cross over the threshold. So the individual is classified as PR-Ms-Gr. This is strictly a visual classification, and this is important because it means that Hector here was ‘typed’ as PR-Ms-Gr, not necessarily “FeNi” or “ENFJ.”

If a person comes to CT believing they are INFJ, and they get visually typed as Proactive Fluid, Candid, Suspended (PF-Ca-Su) then this will be their visual classification regardless of what else may be said about them psychologically. They can then debate with themselves or anyone here on the forum about whether their PF-Ca-Su visual type corresponds to NeFi, or INFJ, ENFP or anything else. That’s the kind of fruitful debate that can be discussed, but the vultology classification would be its own thing. Naturally, CT would hold that PF-Ca-Su = NeFi psychology. But we’ll now be able to talk about the visuals as standalone phenomenon.

I imagine that in normal forum conversation, people won’t call themselves “PF-Ca-Su” as their type. That’s far too cumbersome. I would hope a member would call themselves NeFi, but NeFi would imply having a PF-Ca-Su vultology, if that makes sense? 🙂 Mostly I see the vultology abbreviations being used to talk about vultology in a more targeted way.

Lastly, a bit off-topic but what’s the plan for your own Auburnian type names?

Eh? ;p you mean the spiritual names like Alemin and Edavin? Those won’t be part of Model 2. I’m still not sure how to go about this, but in the psychodynamics domain I think they will be simplified to “alpha prince” and “gamma princess” etc.