Ok, maybe it need explanation.   Tom cruise is used as example of directive Fe.   Yesterday I stumbled upon this photo and to me it looks like Te-taut square cheeks. Also seems like horizontally split.  Also it looks like Fi snarling.    If yes, it means that even this amount of signals at a given moment does not necessary imply the function is present.   If not,  then I think the picture would be a good one to use as an example of something that looks  like Te but isn’t.

Again if this is Te/Fi-signals, as an addendum I would like to mention a thought:   We consider a group of signals as a signifier of a function.  But each single signal is by itself an expression of a trait.   This is somehow implied in CT.
A scowl shows some kind of resistance or skepticism.
Hypnotic eyes show someone who is unimpressed and hard to rattle.
Wide open eyes show openness to experience
Asymmetric movement of the cheeks show disgusts
etc. etc….  (there are some signals that its do not have a psychological counterpart, could be interesting to figure those out)

This should imply that the personality will depend on which of the signals a person shows.
Sometimes it might be difficult to recognize a certain function in a persons personality if he does not show the most typical characteristics of that function.  A Ni without hypnotic eyes is probably another kind of Ni than someone with this signal.  To give a description of personality based on vultology  I think this would be important to take into account, not just the type.

And how about people (might be Tom Cruise  or someone else) who show some signals from another pair of functions (“mixed type”).   Could it be so that this person not only have atypical signals but also is an atypical type? or should the distracting signals just be ignored once the true type has been found?  Or is there together with the inclination to bring people together for some common goal (Fe) a mechanical attitude towards life, where you follow some procedure and do what it takes to reach that goal (Te).
Oh, yes, an example would be Woody Allen,  I saw he has just been typed as TeSi.  I was very excited about seeing him analyzed as I was very much in doubt about his P-axis due to some Ni-signals I once noticed and saved as screen shots.  Here you see hypnotic eyes: 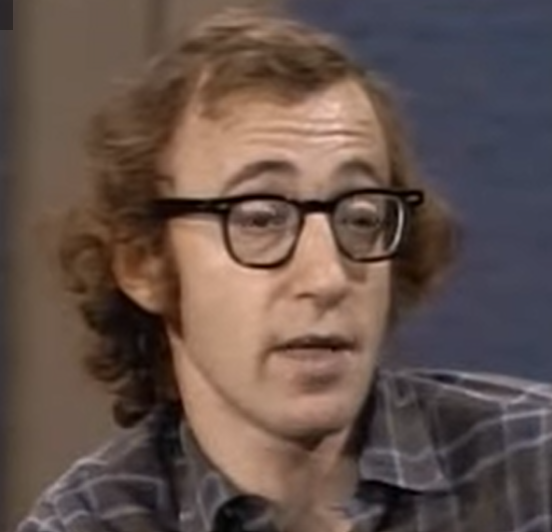 The unimpressed quality of hypnotic eyes fits well with his character in my opinion as he is rather ‘cool’ in interviews and hard to rattle.  This is very opposed to the character he always portray in films.  Not that he is not neurotic, but not in that self conscious way that we know him from movies. And I think the coolness of relaxed eyelids should in some way be considered although it do not fit into the Si/Ne axis.