I am also testing this modelling at the extremes, to see if it holds up. One extreme would be to try to imagine a G type who happens to have an internal belief system that coincides very much with how an R type would have their own. And this is what we see: 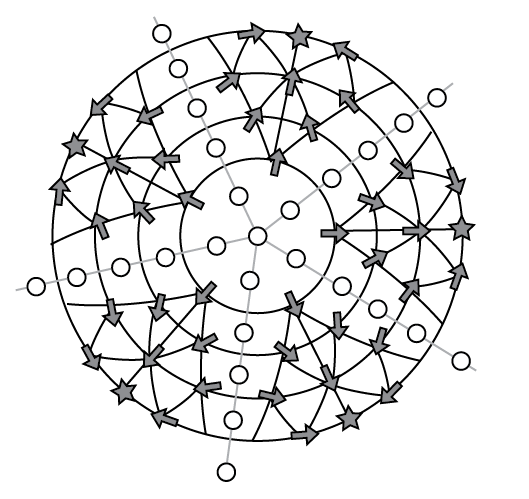 What we see here is a situation in which the G type doesn’t have just one self-crafted object/value, but five. And lets say that practically speaking they’re the same key five values that are also held by a close R type friend:

^ What we see here is an R type who’s radial extension spans out in the same five directions. And yet, the difference is clear. It’s the difference between push and pull. It doesn’t matter if the values are the same, but the “how” of abiding by them is inverse. The R type has these values as a property of the compass, and the G type has these values as an object-vector derived conclusion, or set of conclusions.

The manner in which they go about the values will also be different. The G type will still aim to confirm their own biotic vectors (verbs/acts) according to said values, in a sort of act of self-transmutation. J+ ‘orders’ vectors according to the [ Ideal ]. The value ‘out there’ needs to be ‘met’ by qualia control.

Oppositely, the R type will emanate out according to the compass values, and aim to have reality meet them through R+ mechanistic order.

This leaves open one question though, which is the way R types handle self-change. We cannot say that only G types work on ‘character’. Moral work is another one of those things, like politics and theology, that I need to avoid prejudicing things towards. And I believe this structure can address that point as well.

It’s certainly possible for R types to change the location their values are pointing. But, like a laser beam, change of trajectory is contingent on the starting positions of the emanations. So, in the metaphor above of the 5 pointed star of the R type, the central star may change itself by an act of will, so that the radiation shape changes. Not being an R type, I don’t know to what degree this can be done, but I imagine R types who don’t “like who they are” can find ways to change that, and as a result also their radiated values.

This difference in method — push or pull — necessarily leads to different strategies being more common. A good example of this can be seen in TiNe (Gm-) Amy Cuddy, who writes about Power Poses and using a “Fake it ’til you become it” strategy. This is a type of outside-in self-transmutation, where one’s biotic vectors (one’s “character”) is changed rather pragmatically by doing things that would change the character through the course of doing them. Once again I have to be careful here and not draw 1:1 relationships between behaviors/strategies and R & G. But it does seem more common for G types to find this sort of solution.

And on the opposite side of things, we have TeSi (Rm+) Martha Beck advocating for purifying oneself back into the ‘right form’, a kind of essentialist perfect ‘you’. With books like: “Finding Your Way in a Wild New World: Reclaim Your True Nature to Create the Life You Want.” The idea here being that we go astray from our true north, and that’s why we dislike ourselves. And the solution is to get back to it. Not to ‘become’ something, but to ‘un-become’ what one was distorted away from.

(Again, these are just statistically common messages and motifs I see manifest in R and G types. But what ultimately defines R and G types is the structures/diagrams above. A G type may wish to return to an original shape as well, but that original shape will never be the Radial structure above. It may be more like an R- circles based star that the biotic arrows conform to. Although, I’ll have to leave that matter for another post.)