I also would not like to miss this opportunity to mention that the G structure is inclined toward a certain philosophy as well. I mentioned utilitarianism being more prototypically compatible with R. And if I had to pick one from the set of philosophies I’ve come across it would be orthogenesis. I very nearly chose orthogenic as the term that encompasses the G structure, before choosing to focus on structure rather than philosophy or biology. As per Wikipedia:

Orthogenesis, also known as orthogenetic evolution, progressive evolution, evolutionary progress, or progressionism, is the biological hypothesis that organisms have an innate tendency to evolve in a definite direction towards some goal (teleology) due to some internal mechanism or “driving force”.

The presence of the attractor, and the gravitic implicit bias of G causes it to see causality as not merely ‘there’, or not merely ‘mechanical’, but as having some ‘goal’ some ‘aim’ some ‘teleology.’ Fe, or G+/negentropy, can also be thought of as teleological in its registration of causality.

This pattern is so persistent that we even see it in G+ types with very high IQ’s, G+ Christopher Langan being a prime example of this. He is world famous, has an IQ of 195+, and is Fe-lead. He developed what he called his: “Cognitive-Theoretic Model of the Universe” (CTMU) which he maintains “explains the connection between mind and reality, therefore the presence of cognition and universe in the same phrase”. (…) additionally contending that with CTMU he “can prove the existence of God, the soul and an afterlife, using mathematics.”

And if we go to CTMU.org what we see is this: 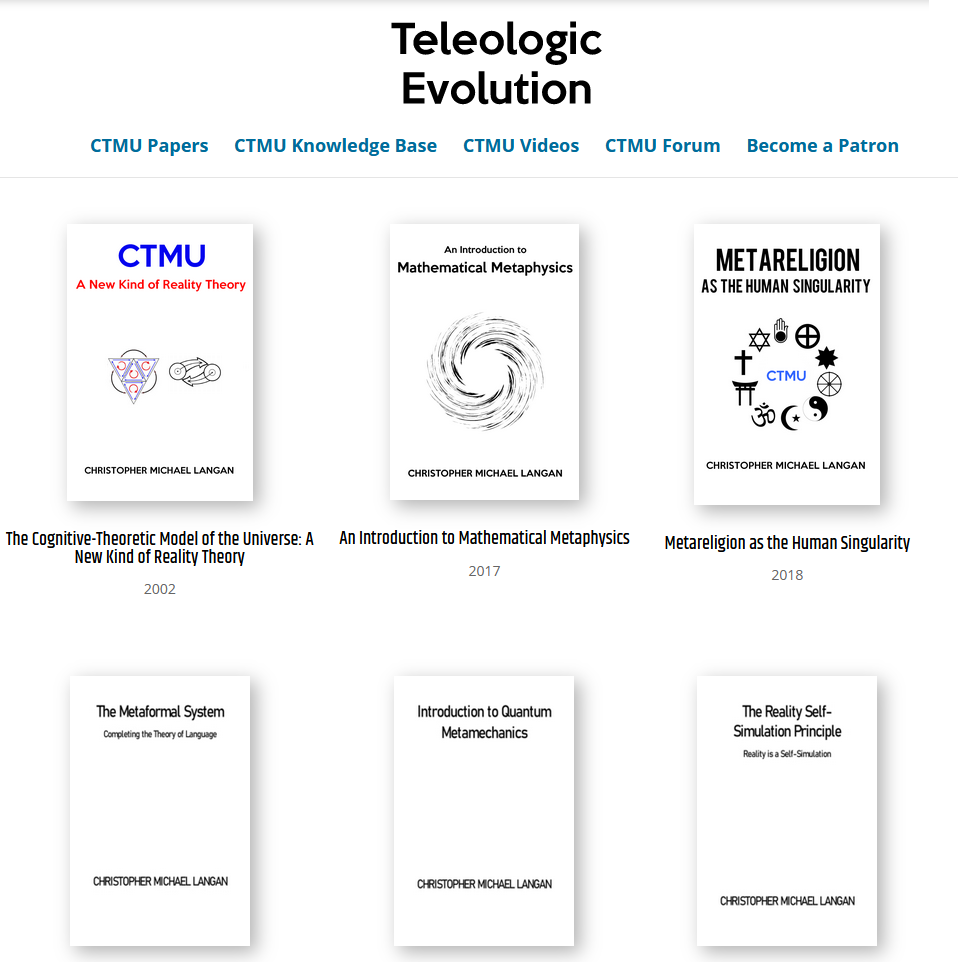 The main title is “Teleologic Evolution”, which again echoes what was said about G+ seeing causality as force-driven towards some non-random, willfully “directed” universal (or at least objective) progress. Langan aims to connect consciousness and universe together — as so many G (Fe/Ti) types do.

Just another example, of many, can be seen in FeNi Thomas Chenault from Pod’lair. Chenault, like Langan, believes himself to have found the ‘true’ ‘Theory of Everything’ which explains mind and reality simultaneously; a common theme. The subtitle of the theory is “Everything is Energy Evolving”, which carries teleological undertones.

Now, I am not making any assertions about the viability of these models – only pointing out how it is that an orthogenetic and teleological predispostion stems out from G’s gravitational structure.

Another related behavioral effect that emerges from G is a focus on ‘human consciousness’, as a sort of objective thing. The presence of the attractor, ‘sensed’ by the G type, leads often times to obsessions about questions which try to arrive at the ‘objective truth’ of the biotic, the conscious. Thus there is a strong statistical connection between G types and cognitive science, or what I might summarize as “theories of the mind/consciousness”, because for G types the nature of the (would-be-abiotic) universe and human beings are roughly the same problem. Insofar as G types are interested in universal questions, it is often the case that they’re interested in them through this mind-angle.

But I have to be careful once again and say that I’m just talking about emergent statistical effects here. There are some G types that are stone cold materialists, but if we did a statistical analysis of the distributions across the general population, I believe there would be a very considerable tilt towards G types in certain fields and modellings like these.