I wanted to try & clarify the comment I made above. After thinking about it some more, I feel like I veered into the realm of “what is my overall attitude toward the topic of drawing boundaries around mental objects”–which gets into all sorts of other things beyond S’s functioning and my direct experience of it. I understand that Si’s purported recognition of things as bounded units or “particles” happens as an automatic effect of perception, not out of any conscious volition. In the case of Si, this bounding takes the form of indexing the information it’s accumulated as discrete, static datasets.

The main point I wanted to make is that it’s in no way obvious or apparent to me–as an Si user–where one dataset ends and another begins. Here’s an example to show what I mean: 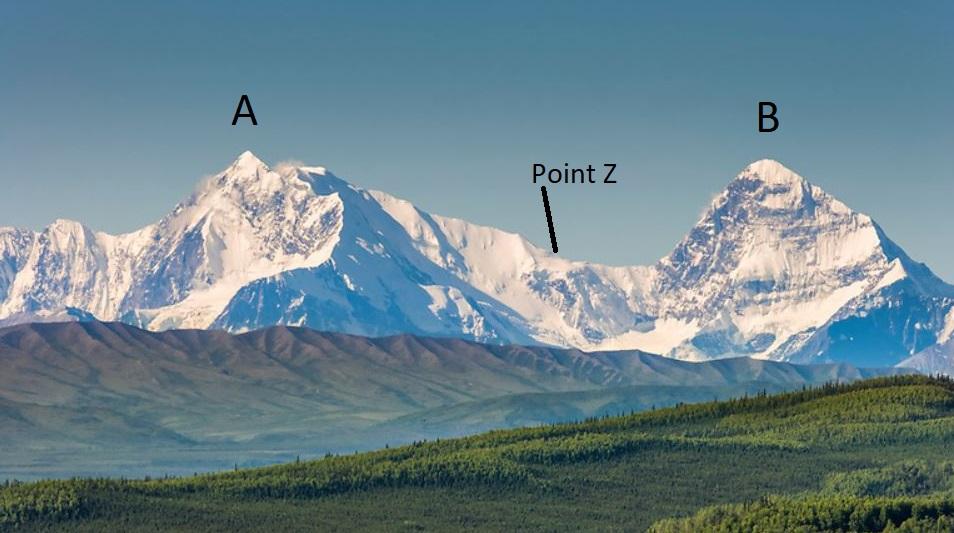 My Si function has indexed these two mountains as Mountain A and Mountain B, and presumably recognizes each one as a discrete object. But anytime I recall Mountain A in my mind, one of the characteristic features I remember is that it’s connected to Mountain B by a ridgeline. It’s not obvious to me where the dividing line is between the two mountains, or even where my Si reflexively places this boundary. From my internal experience, it feels more like a gradient. The quintessence of Mountain A is at its summit: this is probably the single point that most encapsulates its unique characteristics as an object. If I go down the ridgeline to Point Z, I guess I might still recognize that as part of Mountain A. But it’s a part of Mountain A that’s thoroughly infused with the flavor of Mountain B. If I go any farther, it really feels like I’m in a mixing zone between the two objects.

I wonder whether what I’m describing might be associated with “IN”: perhaps the activity of my Ne makes it difficult to recognize the boundaries between adjoining datasets, to the point where I perceive my own worldview as fairly continuous/gradiated. (Again, I can easily see how my Si differs from Ni based on how much I tend to focus on local particularity). Or perhaps the boundaries between Si’s discrete datasets simply aren’t usually that obvious or apparent to the Si user themself?