The “energetic toll” previously mentioned is therefore only secondary. 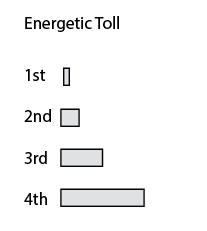 ^ This is a diagram I used before to explain why functions are classed as 1/2/3/4. However, this energetic toll has a more upstream cause, which is the difficulty in integrating a function’s ontological premises and how much they compete with the lead process.

This view has a series of other implications that I find congruent with the data. For example, the higher rates of flat affect samples with lower-two function developments.

The effect that developing the bottom two functions may have on the personality is… one of uprooting their ontological foundation. If they both come into prominence, their core assumptions about the “is-ness” of life are in jeopardy. Thus, it can trigger an existential crisis.

The dilemma @heresy describes within himself comes to mind, where there can be a crippling doubt (Ji+Pe) that thwarts the lead process’ ability to feel as though its foundation is solid and even worth fighting for. The Je-lead with Ji+Pe conscious is outnumbered in their own psyche, thus creating the antithetical development level.

We see this again in l-ll Peterson who, even when discussing his points, appears to be trying to justify to himself very aggressively why his own Je actually is “right”, despite considerable mental opposition. He narrates this inner struggle out to the public in his videos, and in so doing (and succeeding to retain his Je ontology), he shows the world the merits of Je even when confronted with the heaviest ontological opposition.

I wonder what you guys think of this? The full implications are still coming into mind for me but I’m interested to hear your thoughts!