I kinda picked up on the imbalance undertone above too, even though it wasn’t intended. I wrote a little something that I feel might be worth sharing:

One quibble I have with the above hypothesis is that framing anything in CT in terms of certain types better approximating truth (if reality = truth?) and others not, automatically presents a social/political problem. Fortunately, I’m not inclined to side with an equalist philosophy of cognition – heh!

However, egos aside.. I’m a high-Ne user and exist as a counterpoint to the notion of Se realism being necessarily more privy to what ‘is’ with regards to typings at least, and I consider my own functions to be capable of using specifics as echoes of universals too. Indeed, that is how CT has been formulated.

Also, we see plenty of Delta (and Alpha) types as the leaders in science, which is the domain making “what is” the most explicit. In this sense, there’s an accuracy in reality-measurement that Deltas bring (though perhaps through Si+Te?) which acts as a counterpoint to that which is brought up by Beta Ti+Se. Following this path of discussion, we can quickly swerve into the realm of philosophy and debates about “what is real.”

What is Real / Ontology & Functions

But thinking about it more… I think the problem here is in the generality of “is”, and Se realism has to be defined in a more nuanced way. All functions attempt to approach some ontological reality, but they have different definitions and criteria as to what that is.

I have a very general sketch below that might be of some use for discussion, even though I’m not certain of it myself. Here goes:

It seems to me that the two are framed differently, so I made a diagram trying to parse it out more: 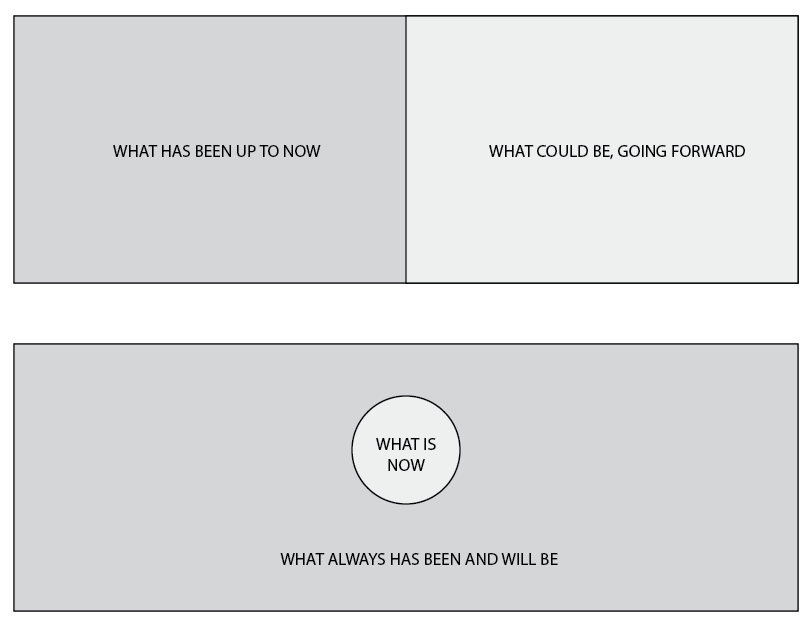 For the Ni portion, Se is embedded within Ni, so that the ‘now’ is a direct reflection of the timeless. In this sense it gives Ni an ontological reality with the same sobriety and gravity as the present – because one is the expression of the other.

This is not the case with Ne, which more readily admits that what it views is a brainstorm of multiple possible futures. This creates an asymmetry in the epistemology of the two axes, where Si/Ne can admit to what is (and has been up to now (Si)) while having an open question as to what might come next. The starry-eyed unknown. And this open question can include the future (futurism), the self (multi-potentialite), multi-identity, etc.

This is reflected even in the eyes, with Ne/Si having naive & confused eyes – which admits to a level of, well, naivete and confusion. While Ni/Se eyes are sharp and ‘knowing’ because even the N domain (the unknown/unseen/trans-real) is in some way bounded in parameters and an outgrowth of what is now evident.

This indeed gives Ne/Si users less constraints to the present — which we can either take as an ego blow for our idiocy (heh!), or we can also take it as a gift of flight (Icarus on one hand, Genie on the other) — that can go places unimagined and bring into being things wholly outside of previous (real) parameters.

Me and @bella have talked about how there is some grief in our experience of reality for not being what it could be, both in a moral sense (Fe) but also just in an infinity-cut-short (Ne) sense. We talk about how we spent much of childhood escaping from ‘what is’ into a fantastical realm where the ‘what is’ could be suspended or manipulated. This is part of the daydreaming aspect of Ne, I think.