@bera, yes there is a sort of non0duality in the inner and the outer. I have tried to understand my experience and give intelligibility to what I saw (the one Mind had been postulated by the ancients and I think modern mystics). I myself don’t know what is going on (that is the delicious mystery in it), but definitely, once I started seeing the mystery and the pervading spirit in my conscious world/universe, I felt and saw that it was concurrent with my Se development. Here are some unstructured thoughts I wrote down, just in case it sparks anything insightful in you.

I wonder why this happened while you were developing Se. I will think about it more but it seems like you might need Se and Ni to balance each other in order to see the world this way. The pervading spirit first sounds like something you would get to using Ni but my guess is you need a certain surge of vitality and intensity of energy to…see. 🙂 Also if we are thinking of Ni patterns, I think it might not be enough to spot them as existing in order to experience the mystery. Maybe you can experience the mystery only when your mind is in a certain state. A certain level of vibration. And usually people attain these states by using different types of substances, listening to meditation music, breathing exercises and other means that aim to bring the mind to a certain point from which “seeing” becomes more likely. When you say, oh ! there are patterns ! – the ! may hold as much importance as the realization that there are patterns. 🙂

But please tell me your opinion about this.

Yes…one Mind. But I have started seeing this clearer while talking to you guys. Before I was just seeing this as a possible theory, like any other. Now it seems like it somehow must be true. I will get back to this after I read a bit about it. I know very little about philosophy and this seems to be a certain monistic view. I don’t even know exactly which one, so I need to check. 🙂

@courtjester – I completely agree with you but my question is – how did the doves appear and gave a message to you ? If this happened, and it sure looks like it did, reality must work exactly like the dream world, in which everything that happens has a meaning that can be decoded later with some analysis. So, the whole material of which the world is made seems to be the same type of material of which dream world is made. And I think this was an idea in some Australian myths. It also seems to be what maya is described as. I don’t really think it can be majorly changed with let’s say lucid dreaming. But I think if we can analyse events in our lives as having meaning to us, this outside is suspiciously dreamlike. And we can either dismiss it as our subjective perception about a concrete reality or we can see it as actually really being a dreamworld we are navigating and co-creating.

About as above so below…I didn’t mention it because 2 tarot references in one post seemed too much :))) but the card that shows this is the Magician. In the RWS based decks at least the Magician points to the sky and to the earth (as above so below), suggesting a mirroring between these 2 worlds. But this is card number 1. And this is – I think – not a coincidence but really well thought. We get the themes of reflection, oneness, illusion and mind all in the same card. That comes right after the Fool – unconsciousness and before High Priestess which deals with duality and mystery. I think our talk somehow covers these cards.

And since I started with this, I will try to post the Judgement card in my deck again… 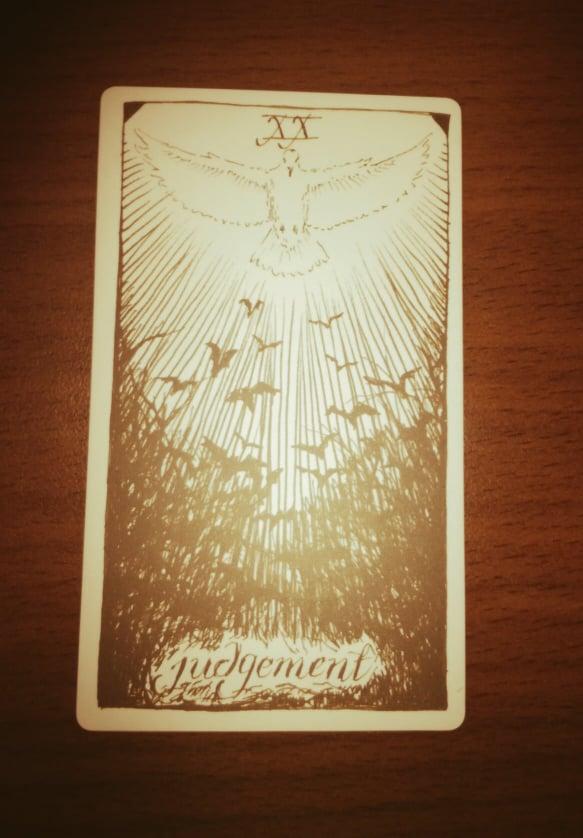 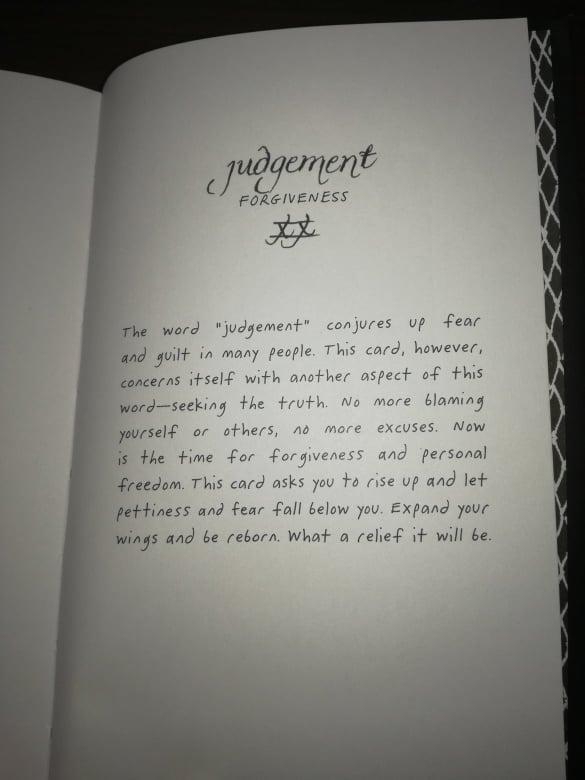 I thought this is somehow connected to your experience and it’s strange that they chose a dove. Well, it is a deck based on nature imagery. 🙂

For example, movie scenes can trigger something similar to this third type. A good example might be, while watching “Invictus” during the prison visit scene. I felt my teeth chatter, my eyes burn and tear, tasted the salt, smelled this wet sea salt-aquarium mustiness and with it came elucidation of what he was feeling emotionally and physically.

Do you think in these cases we tap into the collective unconscious and somehow start to experience what people in this particular situation have experienced? Do we just have archetypes there or do we also have memories stored there? I read some of the collective experience of different animals seems to have a certain influence on patterns of behavior of future generations. I think it was an experiment done on mice but I have to check it when I have a little more time. It seems that after many mice had to do a certain thing…maybe it was going through a maze, not sure…:)…the next generations of mice started to do the same thing faster and more efficiently. Which was thought as a possible sign that there is experience that gets passed from generation to generation. There are, of course, also people who claim to remember past lives. Can this be because (some) memories are stored somewhere in the collective unconscious?

It was not a maze, it was an exposure to a substance correlated to giving the mice electric shocks. And the mice pups of mice parents who were traumatized by getting electric shocks while exposed to that substance were also anxious when exposed to it. They don’t seem to correlate it to collective/generation (?) memories.